In only its second year after regaining its rights to print NFL cards, Topps released a football set in 1969 that featured a player photo against a brightly-colored background: 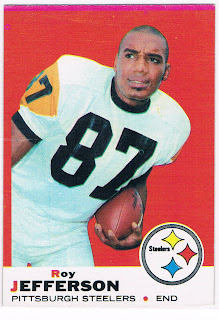 (Remember this photo...you'll be seeing it again)
The cards featured great full-bleed borders, but for some reason they gave Topps some trouble. When they came out with their second and final series, the cards were given white borders and some of the background colors were toned down: 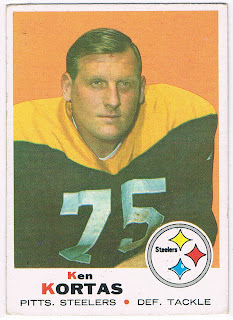 By the way, it's funny to see Ken Kortas as a Steeler in the second series, since he played in Chicago during the 1969 season. By the time this card was distributed through wax packs, uniform #75 was being worn by a rookie named Joe Greene, who kept that number through his retirement after the 1981 season.

The 1969 Topps football cards came in packs that looked like this: 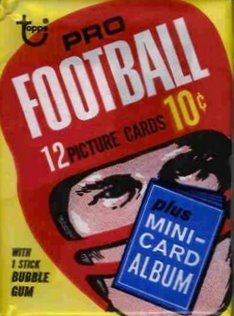 The pack mentions a "mini-card album." One of those is also a part of my Steelers collection: 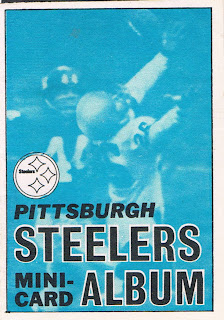 Notice the team logo has no color in it and appears to have been drawn by a high school student. At the same time, the "game action" photo appears to have been airbrushed to remove the receiver's logo, yet the blurriness really doesn't obscure the Giant defender's helmet enough to mask his team's identity. That's Kyle Rote, in what appears to be an old picture. Each team had a different photo, but few actually showed the team featured in the booklet. 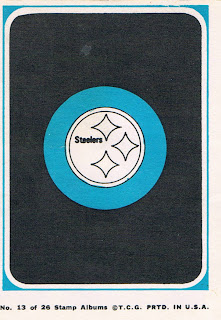 Again, the logo has no color and appears to be a slightly larger version of the one used on the front. There were 26 books, one for each team then playing in the NFL.

Inside, there were spots where small cards could be affixed: The cards were also placed into wax packs along with the booklets, as a perforated sheet of four cards: 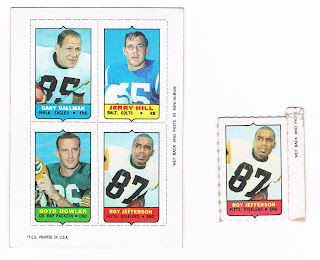 (Yep, the same Roy Jefferson photo shown above)
No, I didn't rip the Roy Jefferson card away, I just happen to have the card as a panel as well as singly. There were 66 panels (264 cards in all, with some players appearing in variations), and 19 players in the set who didn't also appear in the regular 1969 Topps set.
Posted by Chris Stufflestreet at 8:30 AM