My first duty here has been to build a reference site devoted to vintage baseball cards. And my website, which I've slowly been working on since 2000, has done that for the most part. From my first pages covering 1950s Topps and Bowman sets, I went back, hitting the 1930s gum sets and getting the major T-series sets in there as well. Then, I've filled in whenever I've had the time, info and an image.

However, there's always been some really obvious shortcomings with the site. The biggest one...is the lack of stuff from the 19th Century. While I realize that there aren't always going to be people looking for it, I know it's missing. I have added exactly three set descriptions to the site for sets from before 1900 in the past 10 years.

1895 Mayo Cut Plug (N300) was the first. It was added sometime in 2001. Then came N162 Goodwin Champions later that year. Finally, I added Buchner Gold Coin later on when I was given some terrific info about the set. But that's been all.

However, there's been no A&G sets, not even after I made a mental note to make them -- back in 2006 -- so I can capitalize on Topps bringing back the name. I need to do the same thing with Gypsy Queen, for the same reason. Finally, the "Big Daddy" of the N cards...Old Judge...is missing as well.

And what have I been doing all this time? Staying in the 1970s...keeping it in the Topps monopoly era...reminiscing about not being able to find a single 1986 Donruss card where I grew up. This is a vintage cards blog, and I've really lost sight of some of the truly great stuff out there that the vintage world offers collectors. 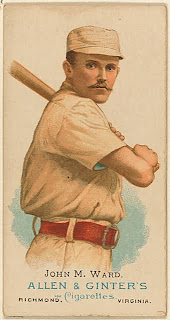 N28 Allen & Ginter
This set was the first of two 50-card sets that featured athletes from several different sports. 10 of them were baseball players (6 of those went to Cooperstown), which has made this a very popular set over the years. Of course, the artwork doesn't detract from that fact a bit. 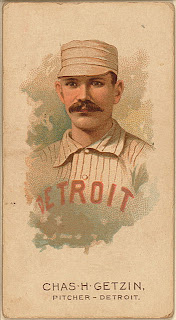 N29 Allen & Ginter
This was the second 50-card set, and this one covered a wider variety of sports. Yes, the big names of the N28 set are gone ("Wild Bill" Cody, Annie Oakley, John L. Sullivan), and the baseball players aren't quite the same level -- six players, but only one Hall of Famer -- but there's quite a variety here. There are runners, walkers, cyclists, hammer throwers, swimmers, pole vaulters, high jumpers, even a tricyclist.

As a premium, Allen & Ginter went and turned those cards into these: 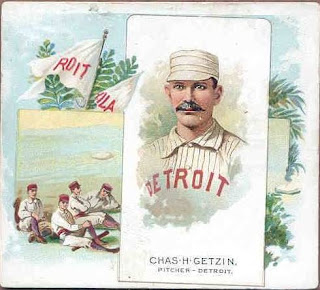 N43 Allen & Ginter
Some of the collectors of modern A&G cards will recognize this design as the same one used for "box toppers" which may seem cool but also might get them to understand that Topps really didn't have any new ideas with the way they set up the gimmicks, either.

I'm not really big on resolutions for New Years, but I really need to make sure I explore the pre-Topps era some more. I need to start pulling out my oldest cards and showing them off. I need to start adding more set descriptions to my website. I also need to finish writing that damned book I've started too many times.

Yes, that's right. I'm writing a book about vintage cards. And I'll have it in a format where you can load it to a Kindle or an iPad and take it to a show with you. Or download it to your computer and have a reference file. As I get closer to getting it done, I'll share more about it.

In any case, whatever new sets get added to the site, I'll share them here, as I always do. I'm just not looking forward to writing out that checklist for Old Judge, though.

Hopefully, this blog should be fired up for 2011.
Posted by Chris Stufflestreet at 8:30 AM