Just a short post today, to commemorate an anniversary. 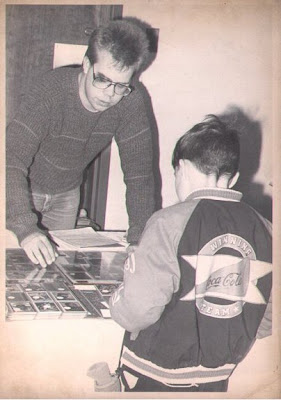 I've shown this picture on the blog before. It was taken on December 2, 1989 and shows me behind the table at my very first weekend show. It was a Saturday show in the basement cafeteria of the Catholic school in my home town of Carthage, New York. It was a cold, snowy day -- December 2nd always seemed to be when I was living there -- and the show was the first one ever held in the village.

That was 21 years ago, which is a couple of lifetimes hobby-wise. It was during the halcyon days of the hobby, where a large collection could seem like a license to print money. Well, almost. I made back the money I spent to rent the table, but most of the rest of my profits there were spent buying other cards for my collection. I also did quite a bit of trading with other sellers and attendees. It was a great show, the first of several I managed to do through 1992 or so.

It's hard to believe that a child born that day is now legally old enough to drink. It doesn't seem like it could have been all that long ago.

Oh yeah, if I look really young in the picture, I was. That day was also my 17th birthday. Which makes today a little more reason to reflect upon.
Posted by Chris Stufflestreet at 8:30 AM