The End of the Road May Be in Sight

Last week, this bit of news made its way into the hobby. Bob Feller has been placed into hospice care. That's never good news, considering the job of hospice is to make a person as comfortable as possible as they make their way over the final feet of pavement that make up Life's Highway. 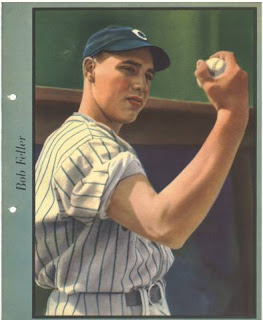 As of this writing, there hasn't been any news that Feller has passed away, but as we saw with Sparky Anderson last month, news of hospice care can be followed rather quickly by a more permanent update. In any case, I hope that whatever happens, Mr. Feller is at peace as he takes his next steps.

Once that news makes its way to the press, there will be a lot said about Bob Feller's Hall of Fame career, about how he was a dominant pitcher even as a 17-year old phenom...how he pitched a no-hitter on Opening Day 1940...how he threw three no-hitters...and lamenting the fact that his 266 wins and 2,581 strikeouts could have been taken to truly elite totals had he not given up four years to fight in World War Two.

And I'll have to disagree with that last one. In my estimation, his service is what I admire the most about Bob Feller. As soon as the news of Pearl Harbor reached him, he contacted boxer Gene Tunney (who was a recruiter for the U.S. Navy) and agreed to do his part for the country. Tunney's position was necessitated by the fact that the military needed to get experts who could help organize calisthenics and exercise programs for its draftees, so he offered professional athletes a position as a chief petty officer in exchange for enlisting. So, Feller joined up and spent a year doing that, as well as playing for service baseball teams along with some of his former opponents and teammates.

Growing tired of sitting around on benches and being used as a propaganda tool, Feller volunteered to be transferred to a position where he could help fight the enemy. So, he was sent to the U.S.S. Alabama, where he spent the rest of the war as a gunner. He certainly saw his share of action, earning four battle stars and being in a vulnerable position of possibly standing in the way of a kamikaze Zero fighter. At a time where few professional athletes would consider walking away from their contracts to take part in military service, Bob Feller was one who willingly and unhesitatingly did that. He was entitled to stay home, since he was working on a farm, but chose to do his part.

As a veteran myself, I've always held Bob Feller in high regard for that. I was able to tell him so in person at the 2009 National in Cleveland. He was scheduled to sign on Sunday at the show, and instead of spending any money for his autograph, I waited until the line got short. All I wanted to do was shake his hand and let him know I appreciated what he did even before I was born. We talked for a few moments about our military days, and then he looked over at my daughter (then 10 years old), who was holding a baseball.

She nodded yes, but I looked over at his aide and said I hadn't paid for an autograph ticket. Mr. Feller cut me off, "don't worry about it." Looking back to my little girl, he said, "can I see your smile?" She responded with a big one, and he started signing her ball. "That's all I need." 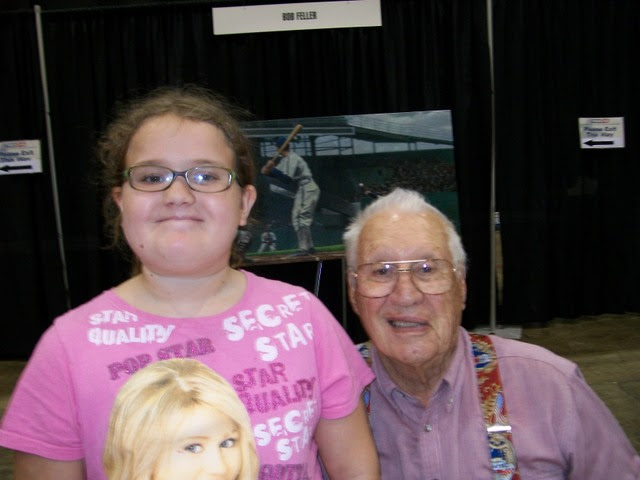 Mr Feller and my daughter, Aug. 2009, Cleveland, Ohio
What a gentleman. He made a fan in my little girl that day. But that's one of several stories hobbyists have about his status as a legend of the game and an ambassador to fans. And, I would add, a great American citizen.

My daughter still has that ball on a shelf in her room. There are other signatures on the ball, but it's Feller's that faces outward. I had to get a plastic case to cover it before we left the show.

Just after this picture was taken, I had a hobby friend tell me that getting a ball autographed by Bob Feller wasn't that big a deal, since he signed everything. My knee-jerk reaction was to point out that at over 90, I may never get another chance to shake his hand and thank him for his service. The recent news about him just makes me feel terrible that I may have been right by thinking that.

If there is a Field of Dreams, you can bet Bob Feller will be given the chance to take the mound as soon as he shows up.

(And now for the sad update: Bob Feller passed away on December 15, only two days after this entry was posted. Here's the obituary from the New York Times. Thank you for shining your light on us for the time you had, Mr. Feller.)
Posted by Chris Stufflestreet at 8:30 AM