A Slight Detour From "Vintage"

I'm going to take a slight turn away from my normal vintage (which I generally define here as "pre-1981") and instead going back to my childhood hobby memories.

In short, I'll toss this out: 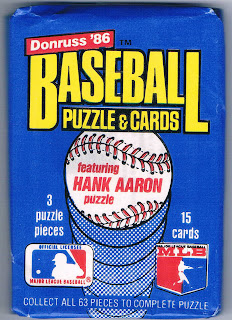 It's an unopened pack of 1986 Donruss cards. It was quite a sight at the time, especially as the supply dried up and prices got higher. I read about the cards every time I picked up an issue of Krause Publications' Baseball Cards magazine (then coming out every two months) and saw how the cards of Jose Canseco, Fred McGriff and Andres Gallaraga were setting the hobby on fire.

I'm just trying to come to grips with the fact that 1986 is now nearly a quarter century ago. Man, 25 years. Where the hell did that time go?

During the Spring of '86, I was still 13 years old and finishing up the 8th grade. I lived in a tiny town in Northern New York and was making money during the winter by shoveling snow from the driveways of neighbors. Anybody who's ever been there during the winter months will understand that there is a tremendous potential for making money that way, since it seems there is a continuous white blanket over the entire area every year from November to April. Some years, it's necessary to incorporate a heavy jacket into Halloween costumes because it might snow that night. Anyway, the winter of '85-'86 was one of the heavier ones snow-wise while I grew up.

The result of all that snow clearing was the fact that I had quite a bit of spending money (a relative term, since $20 was usually more than I ever held at one time) when the new cards appeared on the shelf of the little mom-and-pop shops. So, once the cards began to arrive, I quickly discovered that Topps was once again king when it came to availability. This happened every year. As a savvy card-buyer who had been at this game for eight years at that point, I knew that I could just go around and check out the other usual places. The Fleer and Donruss cards were bound to show up eventually.

I need to point out that I lived in a town that was a mile and a half across, with a slightly smaller town across the river. There were four or five family-owned stores there, with a few drugstores, two supermarkets and one department store. Aside from a few gas stations that also sold candy, there weren't all that many places to get cards with little more than my two legs and a bicycle. And even then, at my age, I still wasn't going to be allowed to pedal 15 miles to Watertown or 10 in the other direction to Lowville (rhymes with "Cowville"). That said, I was able to find some Fleer cards at one of the drugstores -- in a rack-pack with the "Future Hall of Famers" cards, no less -- but nobody carried any Donruss cards. I asked if they could be ordered, but none ever arrived that year. There were some Sportflics packs that popped up late in the summer, but nobody wanted to pay $1.25 for three cards, even if they did have a 3-D feature.

It wasn't just me, though. None of my friends had any Donruss cards in 1986, not even the ones who would take trips in the car to those bigger towns. All the while, there was that damned Jose Canseco card in my magazines, taunting me by its unavailability.

For the record, in 1987 the local stores made up for their oversight by having Donruss cards everywhere. After the pain of '86, I just refused to buy Donruss cards out of principle. That turned out to be a pretty good thing, especially in 1988.

Last month, I was looking at Steve Hart's Baseball Card Exchange website. While looking through the unopened material he was offering, I stopped at 1986 Donruss wax. He was selling boxes for $22 each. Seeing the chance at finally doing something that geography and luck prevented all those years ago, I bought two. And you can bet I ripped those suckers as soon as they found their way to my doorstep, even as my wife shook her head at my childish pursuit.

Had this been 1988, I could have immediately turned those three Canseco cards around and taken a huge chunk out of my wantlists. However, in 2010, Jose Canseco isn't quite the hobby icon he was after posting his 40/40 MVP season.

But, hey...if you're working on an '86 Donruss set, drop me a line. I need about 120 cards and have plenty of duplicates.
Posted by Chris Stufflestreet at 8:30 AM

Email ThisBlogThis!Share to TwitterShare to FacebookShare to Pinterest
Labels: 1986 Donruss