With Christmas Day coming tomorrow, I realize many of this blog's regular readers are busy with other things than stopping by to read what I've written. Actually, that's the way it should be. With family activities, traveling and holiday revelry, anybody who's stopping here in the midst of that to read what I have to say about cardboard pictures that were designed decades ago probably needs to take some time to get away from the computer. A paradox, I know.

Despite that, I'm glad you stopped by anyway. As for me, I'll be working today and tomorrow. Fortunately, my job starts after dark and I'll be getting time and a half for both days.That way, I can still visit with family and friends in addition to getting paid better for a couple of days. That sounds like a win/win to me.

However, since this is a time for giving gifts and you're stopping here anyway, let me pull out one of the oddball cards from my collection to show off today: 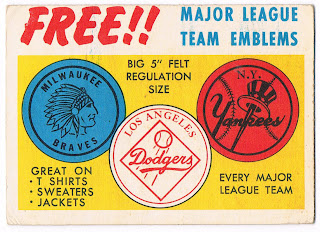 This card is from 1958. It was originally included as an insert in wax packages of regular Topps cards that year, along with a contest card related to the All-Star game. The cards were a way of adding something to packs after the checklists (issued as separate cards in 1956-'57) were incorporated into the regular set.

As the card says, all 16 teams were available as 5-inch felt logos, including the new cities for both the Giants and Dodgers, who had moved before the '58 season began. In order to get the logos, there was a process described on the back: 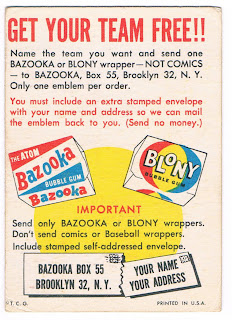 As you can see, this was a way for Topps to boost sales of its two main brands of bubblegum. There's even an explanation that Bazooka Joe comics and wax wrappers weren't part of the deal. There was also an explanation about adding a separate, stamped envelope to get it back, as well as an admonition not to send money.

As for the Topps address, I like the way it shows the way large cities used addresses before the ZIP code was introduced in the 1960s. Larger cities were divided into zones, and Topps' mailbox was in "zone" 32 for Brooklyn, which -- if I've read the history correctly -- would have become 11232 after the implementation of the ZIP code.

I picked this card up from a store in St. Augustine, Florida before it closed down for good. The owner wasn't sure what it was and let me pick it up for one dollar. A nice deal indeed.
Posted by Chris Stufflestreet at 1:49 PM

Email ThisBlogThis!Share to TwitterShare to FacebookShare to Pinterest
Labels: 1958 topps