(About a month ago, I featured some Topps World Series cards from the 1960s and promised to get back to them. Since the playoff series began after the 1969 season, there were more cards to show. While writing this entry, it became really long, so I'm splitting it neatly into three sections and taking the entire week to go over them. I guess I'm just lazy that way.)

Major League Baseball expanded in 1969 and realigned to feature two divisions in each league. This necessitated a round of playoff games before the World Series. At the time, there were many fans who thought this was an atrocity that shouldn't be allowed. At the same time, the businessmen in charge of the game saw it as an extra way to earn money. It just goes to show that some things never change.

The 1970 Topps set features two subsets: one for the playoffs and another for the '69 World Series. As they did in sets going back to 1960, each game from the various postseason series was given its own card.

In the '69 American League championship, the Baltimore Orioles squared off against the Minnesota Twins. This card shows the action from Game 2: 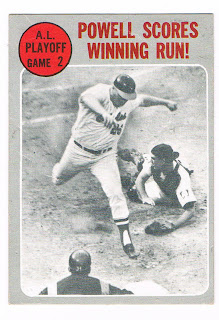 Boog Powell isn't exactly remembered for being a force on the basepaths. It looks like he's doing an awkward dance move in the picture.

What the card doesn't say is that Powell scored the run in the 11th inning, running from second when Curt Motton hit a pinch single to right. It would be the only run of the entire game. Game 1 had also gone into extra innings. The Orioles then got serious, blowing the Twins out in Game 3 to sweep the series.

The Baltimore Orioles had the best record in baseball that year, winning 109 games. Having swept the Twins, they prepared to play against their next opponent. They knew the same day who they'd be playing: 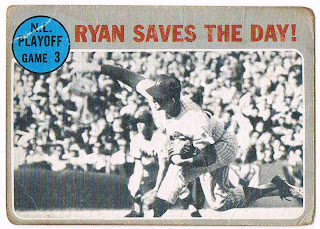 1970 Topps #197 -- Ryan Saves the Day!
In the National League, the Mets also swept their opponents, handling the Atlanta Braves despite Hank Aaron hitting home runs in each game. Aaron actually gave the Braves hope in game 3 with his homer, giving them an early 2-0 lead in the first inning. When Met starter Gary Gentry began having trouble in the third, Gil Hodges sent Nolan Ryan to the mound. Despite giving up a homer to Orlando Cepeda, Ryan got some help from the guys playing around him and won the game. All of a sudden, the New York Mets -- which had never finished higher than 9th place in team history -- were heading to the World Series.

For the World Series subset, Topps used a format naming The Sporting News, much like the one they used in the 1969 set. 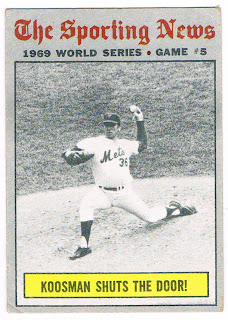 1970 Topps #309 -- Koosman Shuts the Door!
There were two legendary World Championships in 1969. Both featured heavily-favored teams from Baltimore and upstart teams from New York. Both ended with the young new York-based teams walking away with their rings. In January, it was Joe Namath and his Jets winning Super Bowl III; in October, it was the "Miracle Mets."  Since the long-standing "establishment" New York teams (the Yankees and Giants) had gone into decline mid-decade, the Jets and Mets gave New York fans reasons to be proud.

The picture on this card is from the deciding game of that series. Though the game is best remembered for the incident involving Gil Hodges showing a shoe polish scuff on a ball to get Cleon Jones awarded first base, Koosman's composure on the mound after getting into a 3-0 hole early in the game and going on to finish the game without giving up any more runs is significant.

As a result of winning teh World Series, the Mest were given the honor of appearing on Card #1 in the 1970 Topps set: 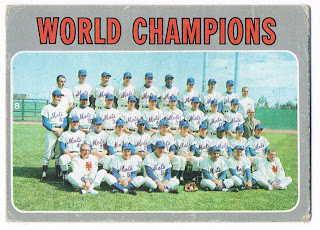 1970 Topps #1 -- World Champions
For the 1971 Topps set, the playoff and World Series cards were featured in different subsets again. Each game was given its own card, with an additional Series "celebration" card, as was the case every year since 1960.

In 1970, the Orioles again took the A.L East flag, and they once again went against the Minnesota Twins in the ALCS. 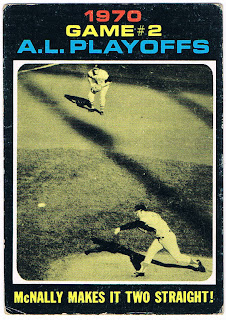 1971 Topps #196 -- McNally Makes it Two Straight!
Once again, the result was the same. The O's swept the Twins in three games. The only difference was that they didn't have any games go into extra innings this time. All three games were won pretty handily. The card shows a Dave McNally pitch during Game 2, but the angle shows Brooks Robinson standing at third as well.

Over in the National League, two different team would vie for the right to play against the Orioles: 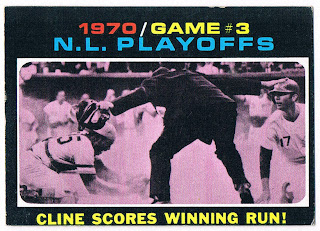 1971 Topps #201 -- Cline Scores Winning Run!
This time, the Pittsburgh Pirates and Cincinnati Reds took the field. The Reds ended up sweeping the Series, with the shot above of Ty Cline scoring the winning run in the eighth inning of Game 3.


In the World Series, two teams led by future Hall of Fame managers (Earl Weaver and Sparky Anderson) and balanced with stars and solid performers squared off. For the World Series subset, Topps used color photos, after using black-and-white ones in the playoff series: 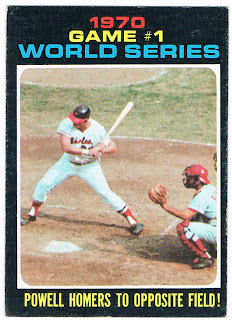 1971 Topps #327 - Powell Homers to Opposite Field!
The picture above mentions Boog Powell's home run. He clubbed one deep into the left field bleachers, which still had the Orioles behind 3-2. Brooks Robinson ended up putting the team ahead with a solo home run later in the game. He also proved his defensive value in this Series, getting the MVP and being featured in replay footage for the past 40 years.

Baltimore won the Series in 5 games, easing the sting of the previous year and getting the chance to show up on card #1 in the 1971 Topps set: 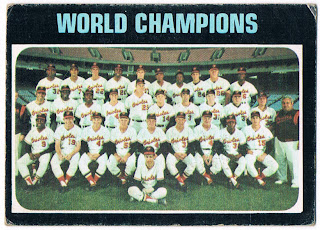 1971 Topps #1 -- World Champions
For the 1972 set, Topps did things a little differently. This time, all the pictures were in color. However, the League Championship Series were represented on only one card apiece and all the cards were part of a single series running between cards #221 and 230. 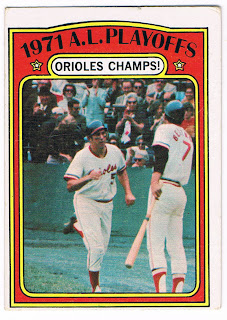 1972 Topps card #222 -- Orioles Champs!
For the third straight year, the Baltimore Orioles swept the ALCS in 3 games, this time against the Oakland A's. the shot above is from Game 2 of the series, with Mark Belanger congratulating Brooks Robinson for a home run. 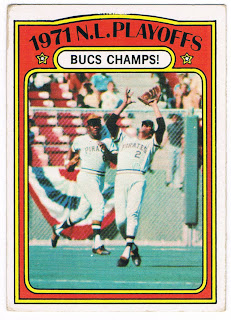 1972 Topps #221 -- Bucs Champs!
The 1971 NLCS was the first playoff series that didn't end up being a sweep. The Pirates won, but not before the San Francisco Giants took one game. The shot above shows third baseman Jackie Hernandez grabbing a pop fly, as Willie Stargell comes in from left field to back him up.

Stargell was one of three Hall of Famers on the Pittsburgh Pirates that year. The other two were Bill Mazeroski and the man shown in the Game 4 card blow, Roberto Clemente: 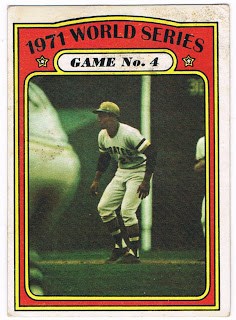 1972 Topps #226 -- '71 World Series, Game 4
On paper, the Orioles were the better team. They were the defending champions and boasted four 20-game winners in their rotation. However, paper doesn't win 4 games. The series went to 7 games, and the the Pirates pulled out with the victory. 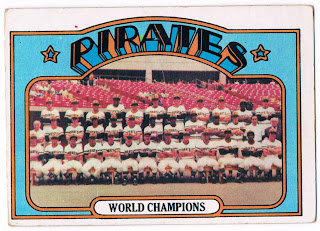 
That would be the final year of Topps giving their #1 card to the World Series winner.
Posted by Chris Stufflestreet at 8:30 AM