This morning, I have three more set descriptions added to my main website as part of the effort to help fill in the missing (some may say blatantly) pieces that have been in long need of adding.

Last week, I did Allen & Ginter sets, and this time I focused on Old Judge: 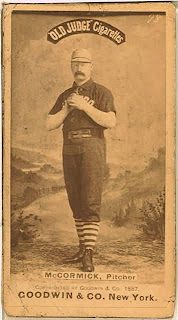 N172 Old Judge set (click to see)
Before there was a T206 set, the Old Judge set was "The Monster." There are more than 500 players, 2,300 total poses and several subsets that have been keeping collectors busy since they first arrived back in 1887. The subsets are a topic I'll need to revisit on this blog in the future.

However, they weren't the first Old Judge cards. 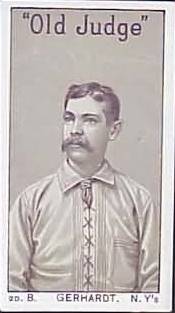 N167 Old Judge (Click to see)
There was a series of cards that came out in 1886 featuring players from the New York Giants team (1885 was the first year they used the name "Giants"). There are 14 cards known, and they're very scarce. Also, they were printed on inferior cardboard, which doesn't help condition-wise.

Finally, there were these large-size cards: 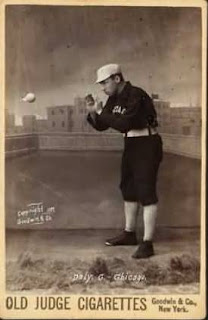 N173 Old Judge Cabinets (Click to see)
These were available as premiums through Goodwin & Co. In exchange for 20 coupons and a quarter, a consumer would get a large-sized version of the photos used in N172 cards. It's not known how different examples of them are out there, since it required a lot of cash (remember, a quarter was quite a bit of money then) and and awful lot of smoking to accumulate these in 1888-'89.

So, I've finally placed Old Judge cards on my site about a decade after I first told myself to do it. I do have some more sets to add, and will continue to share them here as I get them set up.
Posted by Chris Stufflestreet at 8:30 AM