A Non-Card Item From the Collection

(The Steelers begin the playoffs this weekend. With that, I'm hoping a post can help send positive vibes their way.)

Today's post features an item from my own collection, as it does most Wednesdays. However, this one isn't a card in any sense of the term: 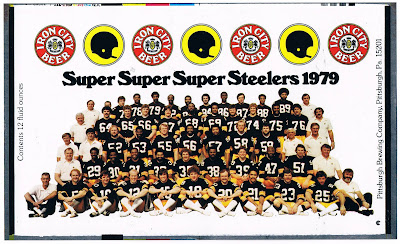 This team photo of the Steelers is on a flat aluminum sheet. It was intended to be used to make a beer can but never was rolled into its final product, which looked a little like these other items from my collection: 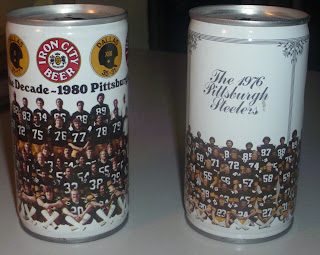 (Not an advertisement for Iron City Beer...honest)
Unfortunately, I don't have the finished can to allow for a side-to-side comparison. It's interesting that the cans don't have any bar code or information about ingredients and nutritional values you find on cans nowadays. It may be a result of their collectible nature, or the fact that they're alcoholic beverages. It can't be due to their age, though, as the RC cans that pictured players on them in the 1970s had bar codes and a list of what was in the drink.

Thanks to the way they sat in uniform order, the Hall of Fame players in the '79 team picture can quickly be picked out:
Additionally, coach Chuck Noll is at the very left, sitting in the second-to-bottom row. That makes 10 Hall of Famers on that team, but there were other fan favorites as well, such as Rocky Bleier (#20), L.C. Greenwood (#68) and Donny Shell (#31).

In 1979, the Pittsburgh Steelers won Super Bowl XIII, which gave them the record for winning more Super Bowl titles than any other team in the NFL. That's why "Super" shows up three times above the photo. They would add a fourth Lombardi trophy to the team display once the season was over, which led to this other item from my collection: 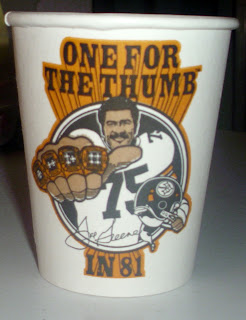 (A Sweetheart cup...I had to have this when I saw it on a seller's shelf)
As we know, Joe Greene never got to add another ring to the thumb before retiring after the '81 season. He would go on to coach with the Steelers, the Cardinals and the Dolphins and didn't manage to pick up any rings while on any of those staffs. As for Steelers fans, they got to enjoy Lombardi trophies #5 and 6 a generation later...but not before one particular game in 1996 where Neil O'Donnell forgot for one quarter which team he was supposed to be throwing the ball to. Not that I still harbor any bitterness or anything...or that I'm complaining. Having friends who are long-time fans of once-storied franchises like the Browns, Eagles and especially the Lions, I've come to realize that it's good to be a Steelers fan even with some bad years along the way.

I picked up the aluminum sheet a few years ago from a store in St. Augustine, Florida that was going out of business. The owner told me I could have it for a dollar. Not bad, considering the completed cans usually cost more than that. As for the Joe Greene cup, that was bought at the 2009 National in Cleveland. I got the last one out of the dozen the seller said he brought with him. That one cost me $2.
Posted by Chris Stufflestreet at 8:30 AM

Email ThisBlogThis!Share to TwitterShare to FacebookShare to Pinterest
Labels: steelers