Last May, I wrote an entry to this blog about Joe Greene. In it, I mentioned that the NFL players' union authorized three sets to release in 1972 and showed the Greene cards from two of them. At the time, I didn't have any cards from the third...but that has recently changed. 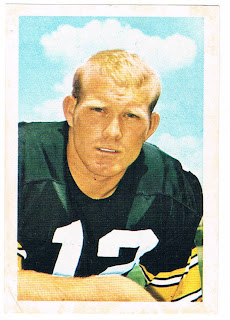 The 1972 NFLPA Wonderful World of Stamps was a set designed to be placed in a sticker album, probably as an item that could be sold at school book sales and in other places that would attract kids' attention. They were actually issued in both 1971 and '72, as there are variations involving players who had been traded or left the team.

There are 390 stickers in the set -- not including those variations -- which broke down to 15 cards for each of the 26 teams them in the NFL. Cards are numbered like the Fleer and Topps sets of old, with players grouped alphabetically by team. In the case of the Steelers, they run from #316 (Chuck Allen) to #330 (Bobby Walden). Here's the back of Bradshaw's card to show his number: 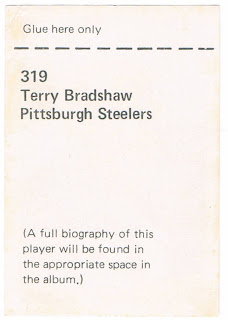 As you can see, there is an instruction to paste the stamp, as it is not pre-moistened. The manufacturer also determined it was unwise to clutter up the back of the stamp with details, as they wouldn't be seen once the picture is placed in the album.

Here is the other Steeler I picked up in the lot: 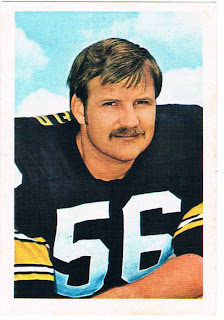 Ray Mansfield was the regular center before Mike Webster arrived. In fact, "Ranger" was the starting center from 1964 through his retirement in 1976. He was one of the few players who stayed on with the team once Chuck Noll began weeding out players who predated his tenure. He was a part of two Super Bowl-winning teams and a fan favorite who was approachable when he wasn't playing. Sadly, Mansfield died of a heart attack while hiking in the Grand Canyon in 1996.

This post isn't all about the Steelers, though. I had to get an entire lot for those two stamps. Here are some of the others: 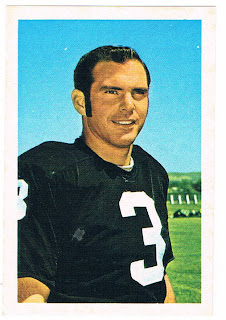 Daryle Lamonica was the starting QB for the Oakland Raiders as they developed into one of the best teams in football and played in Super Bowl II. His first three seasons were spent in Buffalo, backing up Jack Kemp. Between his days in the AFL and after that league's merger with the NFL, he finished with a 66-16-4 record in games he quarterbacked. Only Otto Graham has a better winning record than that. 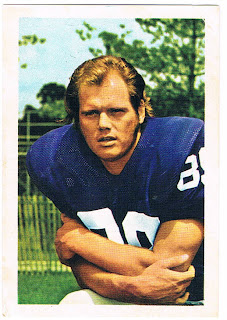 (This card was only issued in the 1971 set)
I grew up in the 1980s and remember Fred Dryer as the star of the TV show Hunter. But before he became an actor, he was a very good football player. After three years with the Giants (as shown here), he went to the L.A. Rams and played for a decade there. As a defensive end, he played on a team that allowed fewer points, fewer yards and sacked more opponent QBs than any other team in the 1970s. He would play in one Super Bowl, against the Steelers. 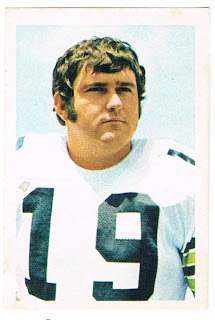 (This card was only issued in the 1971 set)
Tom Dempsey is shown as a member of the New Orleans Saints, but was actually playing in Philadelphia in 1971-'72. He was born without toes on his right foot or fingers on his right hand, so he kicked with a special flattened shoe. This allowed him to kick straight like the old-time players did, rather than the soccer-style kick that had become the standard. In 1970, he booted a 63-yard field goal to win a game for the Saints in the final seconds of a game. It is still the all-time record for a field goal. 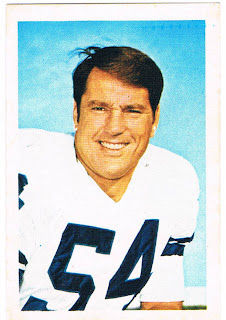 Finally, Chuck Howley was a Hall of Fame linebacker from the Dallas Cowboys' glory days and a member of the team's Ring of Honor. Blessed with speed, he was an interception threat, twice getting over 100 yards a season in returns. He's also the only person from the losing team ever named Super Bowl MVP.

I'm only collecting the Steelers, so if anybody is interested in seeing what else I have in the lot (about 35 cards in all) and would like to set up a trade, let me know. It's a great way for team collectors to add to their own stash.
Posted by Chris Stufflestreet at 8:30 AM