For a Sportscards blog, I really have given short shrift to basketball and hockey. As of now, I've only had one post related to basketball and nothing to show for hockey. Since I haven't collected much of either (despite a 1970s Basketball wantlist that can be seen from my wantlist links on the sidebar) and despite repeated requests for guest articles here, I've had to simply let them slide. However, it's the baseball offseason and the football playoffs are nearly over...what better time to try and get some of the other sports represented while they're still in season?

These images were shared by a buddy of mine from Ontario: 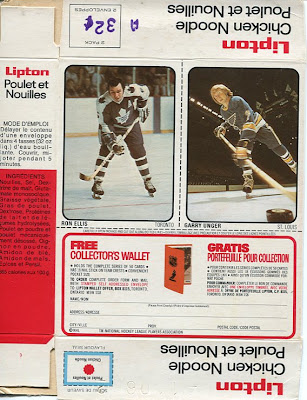 This Lipton box is from 1974-'75. As you can see, there were two cards that could be cut from the box. In all, there were 50 players (with Borje Salming available with either a horizontal or vertical card, for a total of 51 cards). I'm told they're fairly rare...occasionally the 2-card panels and box backs can be found, but the entire box is rare indeed. As you might expect, many of the cards found were cut from the boxes with young hands and scissors...not necessarily a good combination for maintaining top conditions.

I like the image on that Garry Unger card, which show the puck up close (you can click the image to see it larger). He had some other boxes, including this one: 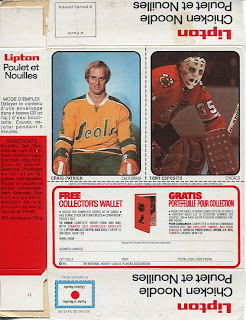 In fact, hockey cards go back as far as the early 1900s. There is some really rich history there, something I'd love to show on this blog as I go along.
Posted by Chris Stufflestreet at 8:30 AM