Teammate to the Legends 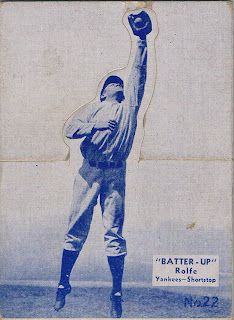 Card #22 -- "Red" Rolfe, New York Yankees
This card is my only Yankee player from the set. If you'd like to know more about the set itself, read about it on my website.

It shows him as a shortstop, but he was the regular third baseman for the Yankees teams that won four straight World Series between 1936-'39. He played ten seasons with the team (1931, 1934-'42), and appeared in six World Series, winning all but one.

Even more amazing is this fact: at some point in his career, Red Rolfe was literally able to take the field with a an all-Hall of Fame team:

That's quite a lineup.

For the record...Joe Sewell is a Hall of Famer as a shortstop, but never played that position for the Yankees. He was the team's regular third baseman from 1932-'34 (and Rolfe took his place once he retired).
Posted by Chris Stufflestreet at 8:30 AM

Email ThisBlogThis!Share to TwitterShare to FacebookShare to Pinterest
Labels: 1934-'36 Batter Up