Here's a card from a set I get the occasional question about: 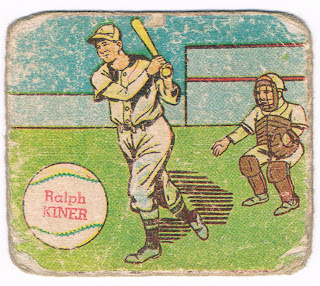 This Ralph Kiner card comes from the 1949 MP & Co. set. Not a lot is known about the set, except that it is crudely made and was distributed in strips. The Old Cardboard site features a full eight-card strip on its set description page, as well as a link to galleries of the set.

There were two sets issued. One was believed to be released in 1943, which makes it one of the few baseball card sets issued while World War Two was underway. Wartime restrictions on paper goods (such as cardboard) and ink caused the set to be given a rather drab look. The quality was low and the pictures barely look like the players they are supposed to show. That's understandable, given the circumstances. However, the wartime restrictions had long been lifted by the time a new set came out in 1949. Some of the players (and pictures) were repeated, while other players who weren't yet active in 1943 (such as Kiner above) were added. Also, most cards in '49 were given numbers.

That said, they're small sets that aren't widely collected, which gives the average collector a great chance to finish a set from the 1940s and for very little money.
Posted by Chris Stufflestreet at 8:30 AM