Those of us who were around in the hobby during the 1980s definitely remember the Box Set. They were 33 or 44-card sets packaged in a box and sold at retail stores for a few dollars. At first, only Topps made them, but Fleer also got into the act around 1987 and there were so many box sets by the time the 1990s rolled around, they were a joke among hobbyists.

It all started out innocently enough, though.

The very first box set was the 1982 K-Mart set. It was a way to help the retailer celebrate its 20th anniversary. The cards looked like this: 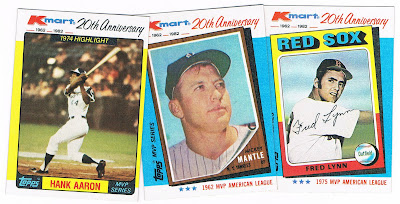 The cards featured the MVPs of both leagues from 1962 through 1981, featured on their Topps card from that year. A couple had to be fabricated, like 1962 Maury Wills and 1975 Fred Lynn (seen above). Wills didn't have a Topps card in his MVP season after refusing to sign a contract with the company, while Lynn had been featured on a multi-player Rookie Stars card and was given his own "unique" card that was only available in that '82 set. Since the MVPs only filled up 41 of the 44 cards in the set ('79 had 2 National League MVPs, so each was given his own card), so three "Highlights" cards were also added to the set. Hank Aaron's card is shown above.

The 44 cards and a stick of gum -- this was Topps, after all -- were placed into this box: 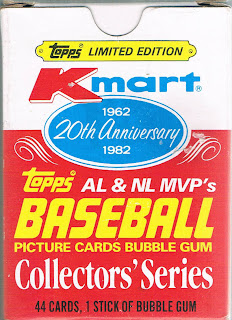 Ah, the "Collectors' Series," a way of trying to encourage mothers to pick up a box and take it home. It wasn't as successful as either Topps or K-Mart hoped. By the end of the year, there were still dozens of these boxes sitting in most stores, marked down to a quarter as a further enticement to get it the hell out of the store.

The back of the box featured a complete set checklist, along with the years of the MVP awards: 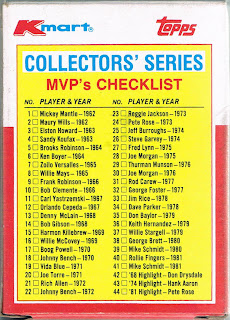 This inauspicious beginning in 1982 was the start of a flood by the end of the decade. What started out as a way to get some extra cards sold by Topps and a few extra dollars for a retailer, as well as new cards for player collectors to chase, became a bloated behemoth during the days of runaway card production. In addition to having Topps, Fleer, Donruss and Score packs all over the place in 1988, it seemed every store -- Woolworth, McCrory's, Kay-Bee, Toys R Us -- had its own "special" set, with ever more ridiculous designs as the years went on. Since some of the stores were regional, it could have presented a neat way to get collectors in certain areas in the country to interact with each other...except the dealers grabbed enough to keep them from ever becoming scarce.
Posted by Chris Stufflestreet at 8:30 AM