Here's a question from my email Inbox that really needs some more info in it... 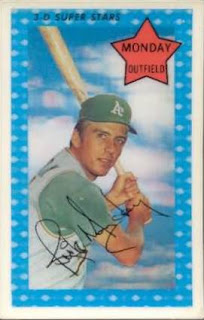 (This wasn't a scan from the email, just a card where I had a scan handy to illustrate)
A:

The card you have was included in a box of Kelloggs' breakfast cereal. Monday appeared in three of their sets between 1971 and 1979. The issue year of your card will be the year after the last one on the stats listed on the card back...for example, if the stats end with the 1978 season, your card will be a 1979 Kellogg's card.

Rick Monday was a dependable player for a long time. However, he wasn't a superstar player like Reggie Jackson or Nolan Ryan, so his card isn't worth much more than 25-50 cents. That is, unless you have his 1971 card, which is worth maybe a dollar.


One minor thing to consider: Kelloggs' cards are prone to bending and cracking. Slight bends are OK, but if your card has a crack in it, it's going to lose a lot of its value.
Posted by Chris Stufflestreet at 8:30 AM