The World Series is going on now, so what better time is there to show off some great Topps subsets through the years showcasing past Series?

As Topps expanded the size of its sets beginning in the late 1950s, some extra subsets appeared as well. In 1960, a short series covered the previous year's World Series. There were cards for each game and a final Series summary card. While some kids may have felt cheated to get one of these cards in their nickel packs instead of "real" cards showing players, they were a great way for fans of the teams that played to get some extra cards.

In the 1960 Topps set, the subset featured the '59 Series between the Dodgers and the White Sox. It was the first Series since 1948 that didn't have a team from New York playing -- that is, if you didn't still think of the Dodgers as a team that had only been in Brooklyn just two years before that -- and marked the first appearance in a Series for the White Sox since their fateful trip in 1919. The Dodgers won, the first of five Championships they would win in L.A. 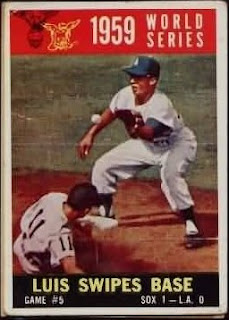 1960 Topps #389 -- Luis Swipes Base
There is some strong argument about this card in hobby circles. It's well known that Maury Wills refused to sign a contract with Topps out of principle after they decided during his minor league days that he'd likely never reach the majors. As it turned out, Wills would be one of the era's best baserunning threats, becoming the first player to reach 100 stolen bases in a year. He was the 1962 N.L. MVP and didn't appear on a Topps card until 1967. Except perhaps on this one. There are fans who debate whether that's Wills or second baseman Charley Neal covering the bag in the shot on this card.

So, the 1961 Topps set was able to feature this postseason classic: 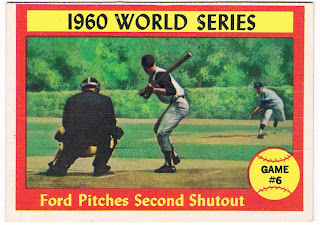 1961 Topps #311 -- Ford Pitches Second Shutout
While people always remember Bill Mazeroski's home run, it's sometimes forgotten just how much the Series was a back-and-forth battle between the two teams. The Series MVP was Bobby Richardson, who played for the losing team. On paper, the Yankees dominated offensively, outhitting and outscoring the Pirates; however, all the numbers that win Fantasy baseball leagues didn't manage to get them four wins.

One of the things that Yankee fans immediately questioned was holding Whitey Ford until Game 3. Whitey had been the Yankees' Game 1 starter in every other Series they played since 1955. Whitey would help the naysayers, pitching complete-game shutouts both times he took the mound. Making him available for three games instead of two may have given the Yankees the title. Management may have agreed, as they sacked manager Casey Stengel shortly after the Series.

So, instead of another year of Yankee Glory, Pirates fans got to celebrate for a year and Bill Mazeroski took the one surprising moment of a very steady (and very good) career into the Hall of Fame. So what happened wasn't exactly a bad thing.


The reason I used the card of Whitey Ford from the '60 Series instead of Mazeroski's was to show this one from the 1962 Topps set: 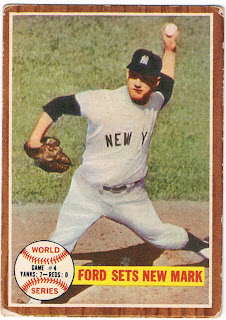 1962 Topps #235 -- Ford Sets New Mark
After pitching two shutouts in '60, Ford came back and threw two more in '61. In Game 4 (as shown on this card), he passed Babe Ruth's record for most consecutive scoreless innings in the World Series. Which means that two long-held Ruth records fell in 1961 and both were broken by Yankees.  Ford would be able to add to that mark the following year... 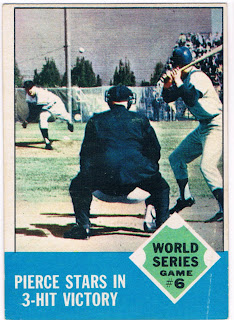 1963 Topps #147 -- Pierce Stars in 3-Hit Victory
However, when Willie Mays scored in the second inning of 1962's Game 1, the streak was halted at 33 2/3 innings. The 1962 World Series between the Yankees and Giants would go to the seventh game, thanks in part to the Billy Pierce pitching gem in Game 6 shown on the card above. He beat Whitey Ford in that game, something no other pitcher had managed to do since Warren Spahn in 1958.

Game 7 was a fight. Although the Yankees won it 1-0, it was a nail-biter right up until the end. The Yankees held on and won their 20th Series in 40 years (yes, they won exactly half the World Series between 1923-'62). They would get a couple more chances to add to that total... 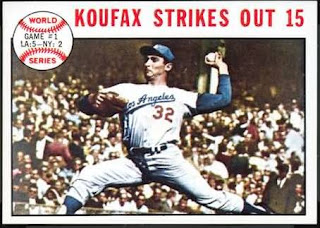 1964 Topps #136 -- Koufax Strikes Out 15
Except the Dodgers they faced in 1963 weren't the same group they had beaten in 1941...and '47, '49, '52, '53 and '56. While a few of the players they faced from the old Brooklyn days were still there, they weren't ready for Sandy Koufax. He made the Yankees look ridiculous in Game 1, striking out 15 (including the first five he faced). The Dodgers immediately showed they weren't the lovable Bums of olden days, giving the Yanks the first-ever four game Series sweep they ever suffered.

The Yanks repeated as American League champions in '64 and were probably happy  to see that the Dodgers didn't come back to meet them again. 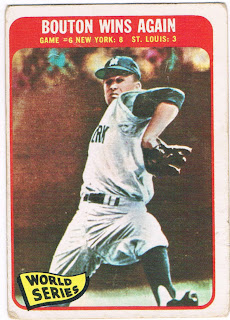 1965 Topps #137 -- Bouton Wins Again
Instead, they faced the St. Louis Cardinals, a team that had its own monster pitcher in Bob Gibson. As shown in the card above, Jim Bouton won a pair of games and Mel Stottlemyre tamed Gibson in Game 2, but the Cardinal ace closed the door on the Yankees in Game 7.

Two interesting bits of trivia: the Yankees and Cardinals both started brothers at third base. Ken Boyer was the Redbird third baseman and Clete Boyer handled the "hot corner" for the Bronx Bombers. Also, after the Series, Cardinal skipper Johnny Keane was made the new manager for the team he beat.

The Cardinals would make two more World Series during the 1960s, but it was the end of the line for the Yankees. The next time they appeared in a World Series, another generation of players would be taking the field.

For 1966, Topps didn't bother to run a 1965 World Series subset. That was a disappointment for fans of the champion Dodgers (who still think Topps was upset with the way they beat the Yankees in 1963) and for the surprising Minnesota Twins, who were surprise pennant-winners.

While I'm not guessing Topps snubbed the Dodgers, what happened in the '66 Series adds some fuel to their fire... 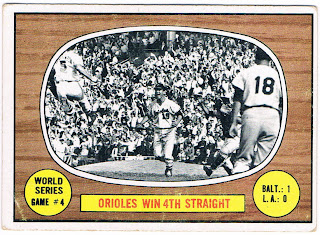 1967 Topps #154 -- Orioles Win 4th Straight
That year, the heavily favored Dodgers were swept by another surprise contender in the Baltimore Orioles. Topps used a similar design that would later appear in the company's football set that fall, with a photo inside a "TV screen" and a woodgrain panel that looked a lot like the console units used then. The design (loosely based on the 1955 Bowman set) would also show up in that winter's hockey set and a couple years later for the Brady Bunch.

The card shown above captures the moment after the last out of the Series was made. Look at Brooks Robinson leaping into the air as he runs toward Dave McNally on the mound. Catcher Andy Etchebarren is also making his way to the mound, while Dodger third base coach Preston Gomez (wearing the #18 jersey) is letting it sink in that his season is mercifully over. 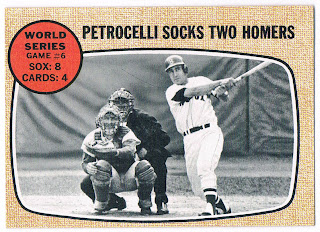 1968 Topps #156 Petrocelli Socks Two Homers
For the second year in a row, the World Series subset was designed to look like a TV screen. However, the burlap pattern from the 1968 set is here as well, looking as out of place on a TV mock-up as the previous year's woodgrain did among the other 1967 Topps cards.

The 1967 World Series was memorable because of the "Impossible Dream" represented by the presence of the Boston Red Sox, a team that was still searching for its first Series win since Babe Ruth was their ace. Once again, Bob Gibson was on hand to shut the door, winning three games in a superb performance. Undaunted, the Red Sox stayed alive by winning three games on their own. As shown in the card above,  Rico Petrocelli hit two homers in the game. His second blast was actually part of a barrage in the fourth inning, when he followed homers hit by Carl Yastrzemski and Reggie Smith. It was the first time in World Series history a team had hit three home runs in a single inning. 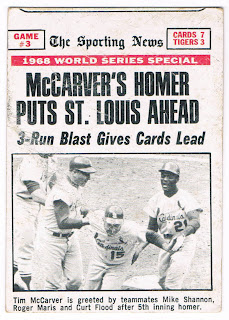 1969 Topps #164 -- McCarver's Homer Puts St. Louis Ahead
I had actually planned on using a different, more presentable card at first. However, I noticed that Roger Maris (who retired after the '68 Series and didn't get his own card in the regular 1969 Topps set) was part of the celebration at home plate.

The Cardinals repeated as National League champs in '68 but faced another beloved team in the Detroit Tigers, another team that had gone some time without any World Series titles. Again, Bob Gibson was on fire, winning two games (striking out 17 in Game 1 alone) en route to helping the Cardinals take a 3-1 advantage in the Series. However, the Tigers came back and won three games when they needed it, on the strength of Mickey Lolich and 31 game-winner Denny McClain. The seventh game was a classic, pitting Gibson against Lolich in a battle between the two best pitchers for a 3-0 Series record.

In 1969, baseball expanded once more and realigned. With that, there were four divisions within the two leagues and a playoff round before the World Series. Topps responded by issuing playoff series cards as well as Series cards beginning in 1970. That will be the subject for another entry later on.
Posted by Chris Stufflestreet at 8:30 AM