(While I don't usually use this blog to promote anybody else's business, I reserve the right to let others know about dealings I've had. After all, the Blogosphere is filled with posts griping about bad experiences. This one is a little more positive...)

A couple of weeks ago, I was doing some research and contacted a seller to get some info. I ended up getting in touch with Matt Fedegreen at The Beverly Hills Baseball Card Shop/California Sports Cards, and we ended up having a great discussion about a lot of different card-related stuff. We ended up making a deal on some stuff I'll be showing on this blog later, but as part of our discussion, Matt asked me if I had this book: 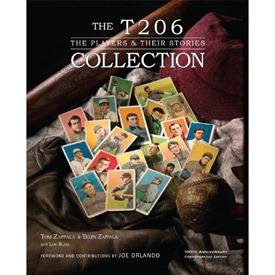 Long-time blog readers may remember I'd mentioned the book a few times before it came out, but I hadn't yet pulled the trigger on picking it up. Needless to say, I have it now. I'll be giving it a review soon, I promise. But from what I've seen so far since pulling it from the box, it's a great reference about all the players who appear on T206 cards, not just the "high dollar" cards or star players.

For anybody who'd like to check the book out, here's a link to Amazon to pick up a copy:

Like I said, now that it's in my possession, I'll be writing a review that will appear here soon. In any event, Matt is one of those sellers who'll be happy to talk about the game, the hobby and other topics while you're looking around (a HUGE plus in my book when it comes to sellers). He's well worth getting hold of, if you have some stuff you're looking to take off your wantlist. He has material ranging from tobacco cards to modern stuff and complete sets going back to the 1950s. I've also found that if he doesn't have something that's a standard-issued card (like a 1953 Bowman Black & White card of Lew Burdette, for example), he can get it pretty quickly.

Not only that...I've discovered that he grades very conservatively, unlike some long-time sellers I won't bother naming. He sent me some stuff that was being touted as "low grade" but was an awful lot nicer than I was expecting based on his description.

So, if you have a little extra hobby money to spare, you won't go wrong getting in touch with Matt. If you do call or send him an email...please let him know I sent you.
Posted by Chris Stufflestreet at 8:30 AM