On Monday, I ran an article about a set of Phillies cards. Today, I'll focus on one of the Blogosphere's most rabid Phillies fans and a package he sent me that showed up this past weekend.

A little while back, Phungo sent me an email to ask if I wanted to make a trade with him. However, I was in the process of moving from one city to another and told him I'd get back to him once I was settled in at the new place.

And then, I did what I do far too often: I let my Inbox bury the email for several weeks. However, a box of my mid-1960s cards from my childhood surfaced when I was helping my Mom move some stuff out of storage. Since I'd assumed they were long gone, I removed them from my lists and collected many of them again. As a result, I had some extra cards to place into my sadly depleted dupes box, and one of them was a 1966 Phillies Rookies card featuring Hall of Famer Ferguson Jenkins.

Remembering Phungo's email, I dug it out, checked his lists and discovered he needed it. I also pulled several other cards he needed and sent them out. Here's Phungo's post about the cards.

He dropped some cards in an evolpe and sent them my way. Here are some of the highlights from his package: 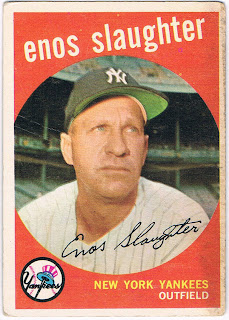 A Hall of Famer, in Yankee threads, no less. Enos Slaughter was "Charlie Hustle" when Pete Rose was still in grade school. His hold-nothing-back, sometimes violent manner on the basepaths and in the outfield was considered a throwback even then. However, he may be remembered for being a product of a different place and time. As a country boy from the South, he was said to be vocal against Jackie Robinson's entry into the sport. He later admitted that he would judge players based on their ability and not their skin color, but the charges persisted.

"Slaughter" is a great baseball name. Here's another: 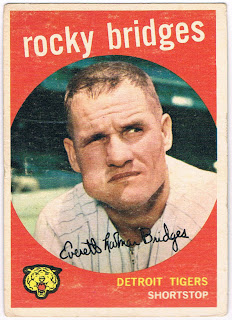 "Rocky Bridges looked like a ballplayer. In fact, he probably looked more like a ballplayer than any ballplayer who ever lived.His head looked like a sack of rusty nails,he kept about six inches of tobacco lodged permanently in the upper recesses of his left cheek, and his uniform always looked as if he had just slept in it...(he) could have intimidated Ty Cobb. He was the sort of guy who would spike his own grandmother to break up a double play."

Their book is available at Amazon, just click the link below. If you've never read the book, check it out. You'll be glad you did.

Back to Phungo's package...here's a player who's best remembered for his nickname: 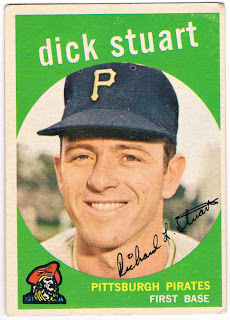 "Dr. Strangeglove" sure made it interesting to watch a throw to first. A baseball legend told several times over involves Stuart getting a standing ovation for catching a hot dog wrapper that was floating around first base. 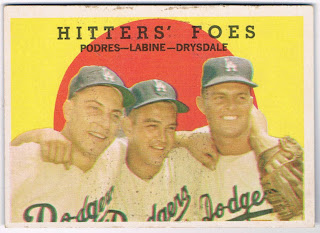 Here's three pitchers from the team that won the 1959 World Deries. Sadly, all three have reunited on the "Field of Dreams." 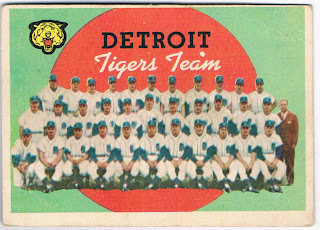 Finally, here's a team card that always seems to be among the last ones I get, due to the rabid Tiger fan base.

In all, I received a stack of cards that ranged from 1959-75 on the vintage side, several current-year needs and some extras that came in this package: 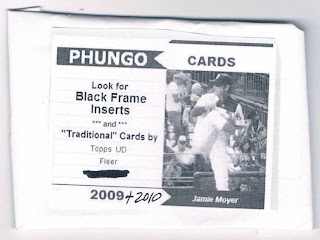 This package included a few Phungo custom cards and some vintage stuff. Thanks again, Phungo, and I'll check out your list again if I ever find the cards I used to have from the early and late 60s.
Posted by Chris Stufflestreet at 8:30 AM