A reader found my site and asked about some cards he had:


"Can you identify these cards? Are they reprints or originals? They are glued to a piece of paper. If use a restoration service to get them removed, would they still be considered authentic or a restored card?"
Here are the scans he sent: 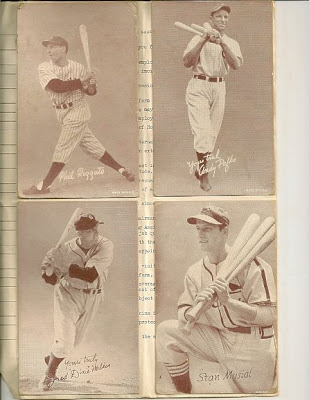 This one features two Hall of Fame players...Stan Musial and Phil Rizzuto. Notice, however, that the other two cards have a "Yours Truly" type salutation. I'll get to that in my answer. 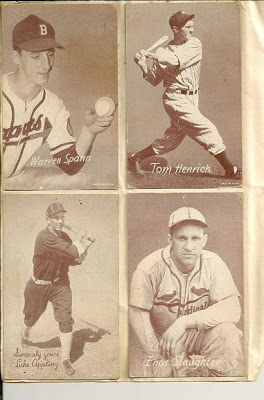 Three Hall of Famers are on this sheet, with the other being a Yankee postseason hero. Notice again how Luke Appling's card is just a little different than the others. 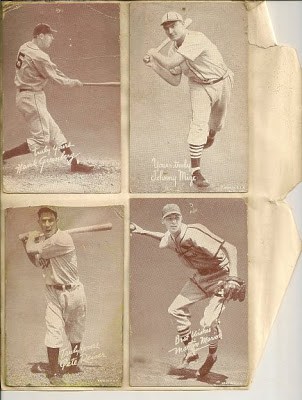 The final picture has two Hall of Famers, but all four have the salutation signatures.
My answer:
Your cards are likely authentic and are from the Exhibit Supply Company of Chicago. The cards were distributed through vending machines located in store lobbies and other locations . A penny got you a postcard-sized photo of a baseball player, actor or other subject.

There were two main sets represented among the cards you've scanned: a "salutations" set issued between 1939-'46 (those are your cards with the "...yours," signatures, and a set with just the player names that appeared between 1947-'66. Despite the years given, the players in the set would vary from year to year.

I've written the following pages with some generic information about these sets (and checklists):
This page covers the 1939-'46 Exhibit set.
This page covers the 1947-'66 Exhibit sets.
There were other Exhibit sets going back to 1921 as well as other sets featuring different subjects, but since your cards aren't older and only show baseball players, I'll limit this answer to the sets listed above.
As far as having them restored, it probably wouldn't be worth doing. Exhibit cards are not very expensive, with commons going for a few dollars and many stars selling for less than $20.
Posted by Chris Stufflestreet at 8:30 AM