About a month ago, I wrote a lengthy post here about the 1959 Topps set. At the end of that entry, a comment by faithful reader ecloy indicated that one of his favorite cards in the set is this one: 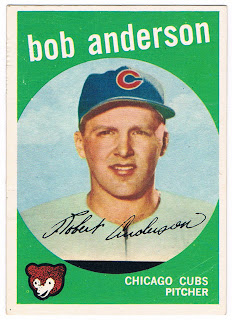 One of my favorite cards in this set features a Cubs pitcher, Bob Anderson. He has one of the "painted" black and white pics, but the photo doesn't extend to the bottom of the photo circle on the front! There is a fairly sizable black spot where the pic just cuts off!

Sure enough, not only do you see where the picture stops...but if you click on the image and show it as an enlarged picture, you can even see where the artist stopped painting the "off-white" color for his uniform. It almost looks like the Topps employee who set up the picture on this card decided on the perfect placement of Anderson's autograph and assumed the artist would fill in the rest.

The card was in my collection but had totally escaped my eye. However, here's something that didn't get missed once I looked at it...that wasn't the only mistake Topps made when they designed this card. Here's what the back looks like: 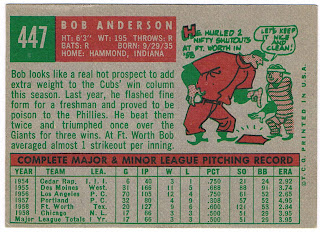 (If you click the picture, it'll show up larger if your eyesight ain't what it used to be...like mine).

It's a pretty standard Topps back. The minor league stats are shown, along with a partial season spent with the Cubs during '58. The '58 stats show up in the bottom line as Anderson's complete major league record. Unfortunately, somebody didn't bother to look at this card from the 1958 Topps set: 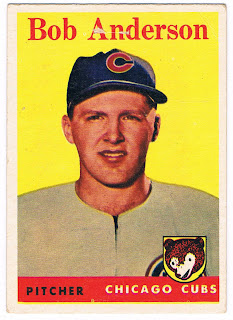 1958 Topps Card #209 - Bob Anderson
Yep, it's the same guy, with the same picture as 1959. This time, however, there's a full uniform that has been painted onto the original photo (which means it could have been used again for the '59 card as well. I mean, it had alredy been done!). But that's not why I'm showing this card here. Check out this back: 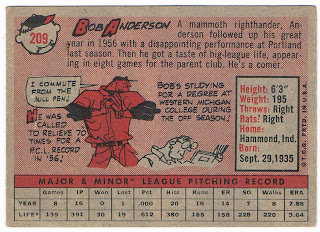 Anderson had pitched a few innings for Chicago in '57 as well. However, those stats didn't warrant any mention at all on his 1959 card. Topps kept records for all its players in a file cabinet, with photos and stats and records of catalog items they ordered in exchange for the money Topps was supposed to pay them for the right to use their picture. For all we know, they had locks of hair and baby pictures of all the players as well. With all the stuff on file, it's odd that they didn't bother to include all of a player's major league statistics -- especially for a player they had already included in their previous set -- on his card.

Anderson continued appearing in Topps sets through 1963. Somebody evidently pointed out the error, because when Topps went back to full-career stats on the back of their 1961 cards, the "missing" 1957 line had returned to his career numbers.

Thanks, ecloy, for giving me the idea for this entry.
Posted by Chris Stufflestreet at 8:30 AM