Back in July, I posted about the 1979 Burger King Yankees set and promised I'd eventually get around to the 1979 Phillies set as well. Today, I fulfill that promise.

In and around the Philadelphia area, Burger King restaurants offered a promotion where customers received a cello package containing three player cards and one checklist card, which looked like this: 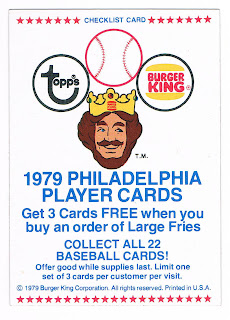 This card is a little different than the one that came with Yankees cards in 1979. On the Yankees card, the Yankees logo appeared above the King's head, in the circle that contains the Burger King logo here. Since the card mentions "Philadelphia Player Cards" it would seem that Topps and Burger King didn't reach an agreement to actually use the Phillies name, but the team's name and logo are on the cards themselves. The other change between the checklist card for the Yankees and Phillies is in the offer itself. The New York-based stores offered cards in exchange for any fry purchase, but limited the offer to customers 14 and under. In the Philly area stores, the customer had to purchase large fries, but the offer was open to everybody regardless of age.

The checklist on the back of that card differs from its counterpart in the regular-issue 1979 Topps set (for ease of identification, all side-by-side comparisons have BK cards on the left): 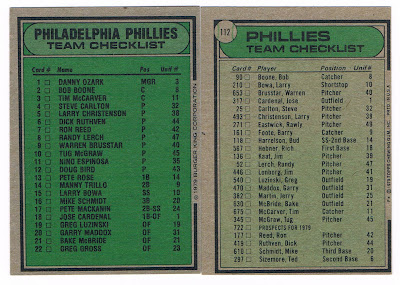 Not only are the card numbers (and in some cases, the players) different, but the color scheme is different as well. However, along the right edge on the BK card, you'll actually see the copyright. Between the company logo on the front and the copyright line, this is the only card in the set that actually mentions Burger King.

My previous article mentioned a couple minor differences between elements on the backs, which are also present in the Phillies set as well. Here's a link to that description if you'd like to see them.

Another difference between the Yankee and Phillies sets is the team card. While the Yankee set featured a team card similar to the one in the regular Topps set, the Phillies set instead has a card for manager Danny Ozark: 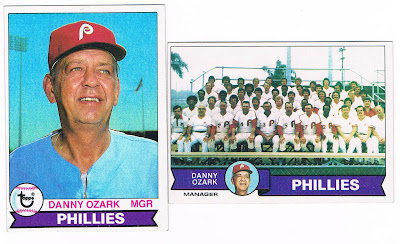 It appears BK used the same photo of Ozark that was provided for the inset photo on the team card. In the case of the Yankees, manager Bob Lemon began the season but was soon fired to allow for Billy Martin's return to the position. Ozark's position was only slightly more secure; however, he would also be fired before the season was over.

Many of the Phillies players appeared with different crops to the photos used on their regular Topps cards. While most differences are slight and require an eagle eye to tell the difference between them, Bob Boone was given a much more noticeable edit: 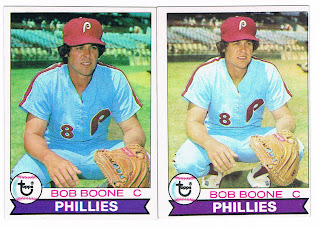 Not only is the photo on his BK card darker, it was cropped to show him closer.

There is one player in the BK set who didn't appear at all in the regular Topps set: 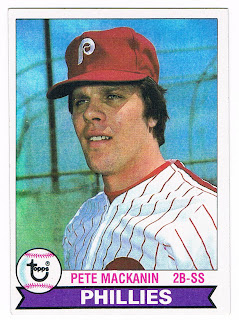 Pete Mackanin was a little-used utility infielder. He spent almost all of the 1978 season in the minors before being picked up by the Phillies in late-season waivers, so Topps may have made the decision to leave him out of their '79 set due to that. He would only get into 13 games in 1979, most in September.

There are also five players in the BK set who were featured with other team in the regular 1979 Topps set: 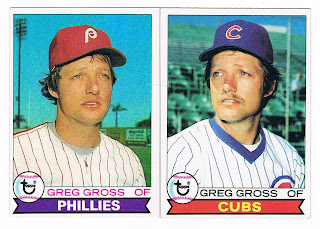 Greg Gross was signed as a free agent in December of '78. However, notice that he's shown in his Phillies uniform on his BK card. 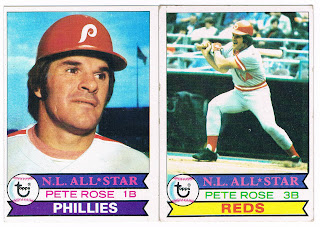 As for the Phillies' most famous new acquisition, it's hard to tell if that's a really good airbrush job on Pete Rose's batting helmet or a glare that makes the logo look like it may be fake. Rose also singed as a free agent with the Phillies in December '78, so he should have a picture in a Phillies uniform like Gross does. The shirt shown on the BK card looks like it's been worked on, which makes it hard to say it's not airbrushed. 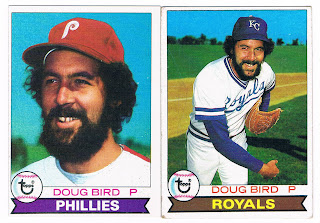 In the case of Doug Bird, it's an obvious airbrush job. However, he was traded to the Phillies right at the beginning of the '79 season so it's understandable. However, look at his shirt. It looks a lot like the one on Rose's card. 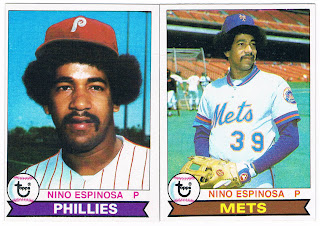 Nino Espinosa was also traded to the Phillies just before the '79 season began. That's an even more obvious airbrush job on the cap peeking out from above Espinosa's very 1970s afro. 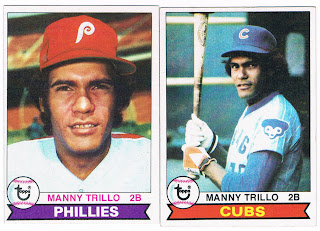 The final new Phillie is Manny Trillo, who was also traded to the team just before Opening Day. Trillo made a great addition to the Phillies' infield, as he had a great glove.

In all, there were 15 players (including Schmidt, Carlton, Luzinski and McGraw) from the BK Phillies set who were also in the 1979 Topps set as Phillies. They are among the cards that sometimes confuse collectors about their numbering. That said, the Phillies have a rabid fan base, which make these Burger King cards a great little set for them to put together.
Posted by Chris Stufflestreet at 8:30 AM