(Today's post is the 100th I've written for this blog. Since starting a little more than six months ago, I've been able to keep writing new stuff for it. Hopefully, there will be more as time goes on...but I'd like to take the opportunity here to point out the bit on the left-hand side asking for submissions. Specifically, I'm not a collector of basketball or hockey...but I'd love to get some stuff on here about vintage cards from both sports and make this truly a "Sports cards" blog. Now, I return to the regularly-scheduled entry, already in progress...)

The Brooklyn Dodgers are still beloved by their fans even after more than a half-century since leaving their borough for the California sunshine. I grew up in Upstate New York in the 1980s, and remember how people were still heartbroken by the move...in fact, the father of one of my friends used to tell me that he quit paying attention to baseball the day he learned the team had moved. As far as he was concerned as a young man, if his favorite team was going to leave, he had no business with the sport at all. A little extreme, I suppose, but I respect the hell out him for sticking to his guns.

Here's one of the most popular players on his boyhood team, from my 1953 set-in-progress: 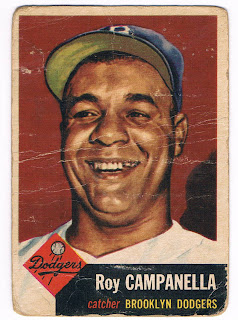 I picked this one up for about $4 on eBay a little while back. The low price was due to the seller not featuring a picture in the auction. She did accurately describe that it had damage, which likely kept prospective buyers away if they couldn't see the extent of that damage.

The worst part for me was waiting for the card to arrive. I wanted to see for myself if it was a good deal. While I was satisfied when the card arrived, my imagination made me think it would look a lot worse than it did. I wasn't exactly worried due to the low selling price, but I shudder to think about the anticipation if I'd blindly spent an awful lot more on a pictureless auction out of faith.

Anybody else have an eBay story like that? Winning an auction where you didn't know what was going to show up?
Posted by Chris Stufflestreet at 8:30 AM