Q: "Could you explain the Joe Page/Johnny Sain errors in the 1952 Topps set?"

A: When the first series of the '52 Topps set was produced, mock-ups of each card were laid out on a sheet before being printed. According to the legend, the proofreader (or a printer's assistant) dropped two of the biographies and inadvertently switched them when they were returned to the sheet. As a result, the first printing featured incorrect biographies for cards #48 (Joe Page) and #49 (Johnny Sain).

For years, I had assumed the card backs were switched. I was amused to find out several years later that not only was I wrong about that, one of those errors actually resided in my own collection for more than ten years without being detected. That was quite a surprise for me. 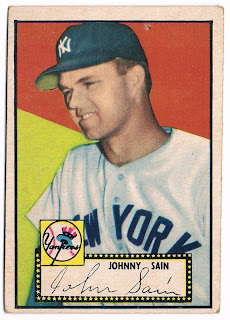 You can see a hole at the top where a tack once went through it and the centering issues -- in this case, a "diamond cut" -- that frustrate many high-end collectors of this set.

Now take a look at the back of Sain's card: 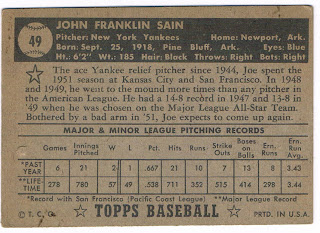 While the back says "John Franklin Sain" and has the correct vital statistics, read the biography a little closer:

It says "Joe" instead of "Johnny." Not only that, but it mentions relief duties with the Yankees since 1944 when Sain was renowned for his spot in the Boston Braves' late 1940s pitching rotation ("Spahn, then Sain, then pray for rain"). The error was corrected, with the incorrect backs being scarcer (and more valuable).

Lastly, all 1952 Topps cards between 1-80 come with two different back colors, all-black or red and black. The Sain/Page errors were fixed before the color change was made, so no bio errors are found with red backs.
Posted by Chris Stufflestreet at 8:30 AM