Monday's entry was about a set that was given to consumers who bought dog food...so today I figured I'd share a bunch of dog ears.

Back when I was beginning to get into collecting vintage material as a teenager, I was often forced by necessity to keep my expenses low. Back then, when I still lived in my parents' house and my hobby purchases were usually financed by the First National Bank of Mom, I usually opted to find low-cost material to add to my budding collection.

Fortunately for me, it was the 1980s and there were still dealers who had dime and quarter boxes on their tables that could get me some vintage material. While I knew I wasn't going to pull any key cards from those boxes, they allowed me to add more cards to my collection given my budget. For some reason, I seemed to get an awful lot of 1958 Topps cards from those boxes. In fact, at one time, my collection of 1958 Topps cards featured so many dog-eared cards I began referring to it as my "dog pound" set. 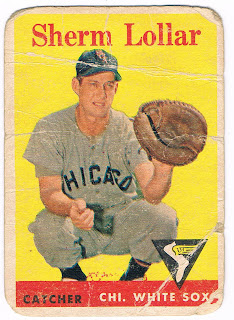 Sherm's card looks as wrinkled as his shirt. I know he was known for being a durable catcher, but this card just looks worn out. 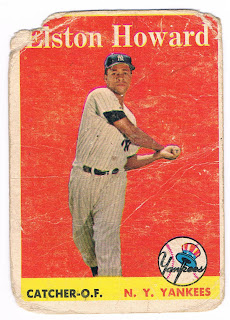 A player whose uniform number has been retired by the Yankees, the 1963 American League MVP, and the guy who finally displaced Yogi Berra from behind home plate? Definitely worth a quarter. 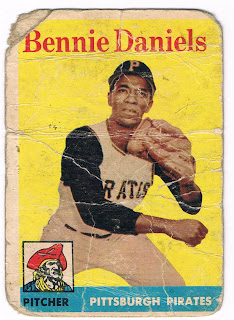 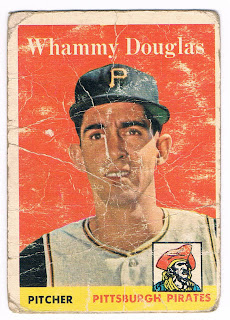 This card was worth it for the name alone. Those of us who remember the TV game show Press Your Luck might wonder whether this card managed to lodge itself into the deep subconsciousness of a 1950s kid and future TV executive who thought "Whammy" would be a great name for the gnome who pops up and takes away all of a contestant's winnings. 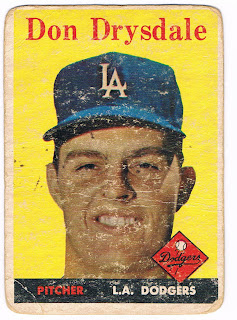 Finally, this was a card that wasn't picked up in a dime or quarter box but is holding a space in the binder for a future upgrade anyway. 1958 was the first year the Dodgers played in L.A. so the team players' cap logos are all airbrushed in this set (and the Giants players, too). While the Dodgers' caps look relatively clean, some of the Giants look terrible. I'll have to show them in a future post.
Posted by Chris Stufflestreet at 8:30 AM

Email ThisBlogThis!Share to TwitterShare to FacebookShare to Pinterest
Labels: 1958 topps