Read My Past Hobby Articles

Like many, I recently went looking for a new job.

I wasn't fired from my old one...I actually walked away -- on my own terms -- after 12 years there. There's something about realizing you're where you are and not going anywhere. And when you get told you can't move within the company because you're "too qualified" (which is corporate shorthand for "too expensive" or "not as easily manipulated") and can't move up the ladder unless somebody dies or retires...at a time where nobody's retiring due to economic conditions. So, I realized I needed to either suck it up, stick it out and hope for a promotion that might never arrive or else walk through the exit door.

In a way, it's like the guy in the song "Take This Job and Shove it." Except I actually left, where Johnny Paycheck sang he only wished he'd have the nerve to do it.

This is not a time where a lot of people would take the door...but there I went. It wasn't an easy decision but once I pondered the option, it didn't make sense to stay.

In case you're wondering, I was a technician for a cable company. And while I could have stayed there as long as I wished and relatively secure that my position would be there, it wasn't the job I started doing back in 1998. Seniority meant little, the company was making the job more burdensome (perhaps because they knew we'd deal with it because we weren't certain we'd quickly get another job) and we were being held to standards that shifted focus on a seemingly monthly basis. So, I decided it was time to put the tools back in the van and park it for good. And to do that without having any idea where I'd go next.

I haven't regretted doing it, even when my mother-in-law asked me why I was doing something so crazy.

But that has absolutely nothing to do with vintage sportscards.

While looking for something else to do, I was looking for a way to share some of my past writings to prospective employers without running off a bunch of copies and mailing them. What ended up happening was that I scanned them and converted them to PDF files. That way, I could send them in emails. As for my hobby-related writings, I am now able to share them with readers who are interested in seeing what I've done.

The articles can be found by clicking here.

Among the articles are this one, which I wrote about the 1973 Topps set and its photography (something I also blog about): 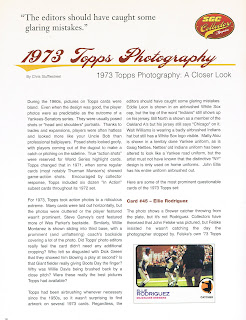 Or this one, which I wrote about collecting off-condition cards: 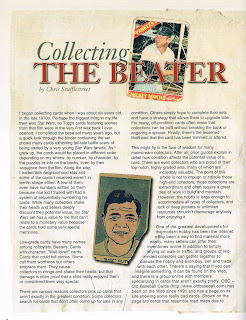 One article isn't available for download yet. I wrote a cover story for Old Cardboard's second issue about baseball players in the service. However, the publisher feels offering the article when he's still selling the back issue is unfair. So, I've added a link to their site. It's worth it...in fact, if you like seeing much of what appears on this blog, you should subscribe to the magazine.

Lastly...I did get another job. I'll be returning to my roots (the media and entertainment business, the field of my bachelor's degree) and writing for the company that does TV ratings. I have a pretty fair talent for writing (or so I've been told) and begin next week. I'd have never found it if I decided to stick it out in a dead-end job.
Posted by Chris Stufflestreet at 8:30 AM