A Neat Type Card From My Collection

First off...I'm a little disappointed. On Monday, I wrote a lengthy piece about the 1959 Topps set. In two days, it became one of the most visited posts this blog has ever had. But not a single person could be bothered to leave a comment. Come to think of it, this blog had very few comments at all lately. So people are stopping by, reading and aren't making any effort to say what they think about it. That makes me wonder.

Is this blog so good that comments aren't necessary? I doubt it. Am I doing a lousy job? I have no idea. Because without any regular feedback (good, bad or indifferent), all this is...is one guy writing.

Anyway...here's the regularly scheduled post. Sorry for the off-topic ranting from a guy who probably should be sleeping in:

There are several specific "eras" among the history of baseball cards. Many of these eras began and ended due to business cycles (the rise of the tobacco monopoly around 1890, then the forced breakup of that monopoly around 1910) or historical events (for instance, World Wars One and Two). What collectors call the "postwar era" is generally believed to have begun in 1948 when Bowman and Leaf arrived on the scene. However, that isn't entirely correct; the second World War was over in 1945 and other card sets -- mostly regional in nature -- appeared before that.

Here's an interesting type card in my collection I'd like to share, along with a story about how the player featured came very close to making baseball history that season: 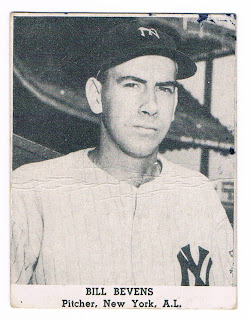 This card is from the 1947 Tip Top set, which was essentially a series of regional sets issued at the same time. There are 163 different cards, featuring players from 11 different teams. The cards were distributed in the regional area around each team's home city: Giants, Dodgers and Yankee cards were distributed in the greater New York Metropolitan area, the Braves and Red Sox were released around Boston, and so on. Each team had either 14 or 15 different players, many of whom are obscure because they played during the war and weren't around when Topps and Bowman were duking it out in the 1950s. Though ignored by many collectors (and sources like Beckett), cards of Yogi Berra and Joe Garagiola in the set predate their generally-accepted "rookie cards."

The card backs contain an advertisement for Tip Top bread: 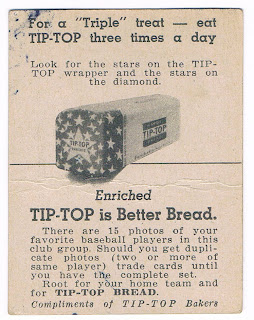 Advanced collectors know the Tip Top name from a 1910 set commemorating the previous year's World Series champion Pirates. That set had been designated D322 by Jefferson Burdick in the American Card Catalog, while the 1947 Tip Top set is D323.

The player shown above is Bill Bevens of the New York Yankees. He almost made major league history in 1947 when he worked a no-hitter into the ninth inning of Game 4 in that year's World Series against the Brooklyn Dodgers. With one out in the ninth, he walked Carl Furillo. Al Gionfriddo pinch-ran for Furillo, stealing second with two outs, causing Yankee manager Bucky Harris to order Bevens to intentionally walk Pete Reiser. As pinch-hitter Harry "Cookie" Lavagetto walked up to the plate with two on and two out, Bevens prepared to finish the game with a ground ball. However, Lavagetto lined a double that broke up the no-no and won the game for the Bums. Interestingly, that wild win was credited to Hugh Casey, the same pitcher who uncorked the wild pitch that got past Mickey Owen in the 1941 World Series.

Like many moments in baseball history, Bevens was so close...only to watch as Lavagetto got the glory. Even though the Yankees went on to eventually win the Series in seven games (and with Bevens pitching relief in that last game), Bevens was saddled with the "goat" label. After Don Larsen pitched his perfect game in 1956 against the Dodgers (some of whom also played in that '47 game), Bevens was largely forgotten. In fact, that final Series game in 1947 would be his last appearance as a major league ballplayer. He passed away in 1991 at the age of 75.
Posted by Chris Stufflestreet at 8:30 AM