A Couple More Cards From My Collection

Last time, I posted about football cards and will continue that with a couple of cards from my own Steelers collection. Here are two of my 1957 Topps cards: 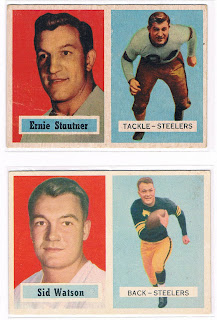 For instance, look at the Stautner card. It's a high number card of a Hall of Fame player, and I paid around $5 on eBay to add it to my collection. It's unlikely I'll ever find a '57 Topps baseball card of a Hall of Famer for $5 in any series regardless of scarcity that looks anywhere near as nice as this one.

However, the design of the '57 football set led some kids to use their imaginations. Why be satisfied with one card when you can have two? Thus: 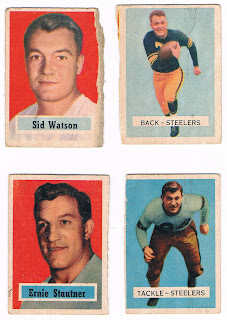 At least the Stautner card was cut apart. It looks a little neater than the ripped Watson card.

Where the cards shown at the top of this post would normally be upgrades to the ones below them, the two (or four, depending on your perspective) "mini" cards were included in a trade as "unique" variations. They still sit in my dupes box if anyone's interested.
Posted by Chris Stufflestreet at 12:41 PM