"I have a Tom Seaver card that I can't seem to find the value of anywhere.  It's card No. 7 of 75.  On the bottom of the card's back is XOGRAPH, 1968 MLBP Ass'n, Insignia TM of Major League Club, 1969 MLB PromoCorp.  Can you tell me the estimated value of the card please?" 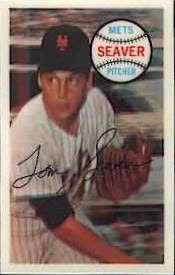 The Seaver card is from the 1970 Kellogg's set. As you might guess from the set name, the card was available as a free "prize" inside boxes of cereal (Kellogg's did that every year from 1970-'83 inside boxes of Raisin Bran, Corn Flakes and other brands). The 1968 copyright date is a little misleading; it's the year that the player's union gave permission to Kellogg's to make the set. "Xograph" was the process the maker used to give the card its 3-D appearance.

Even though 1970 was the first year Kellogg's made sets, they are plentiful. However, because they are prone to curling and cracking, they have never been very popular. While I don't normally toss out card values here, I've seen 1970 Kellogg's -- including Hall of Fame players like Seaver -- for only a few dollars at card shops. If the plastic coating on your card has cracked, it's worth much less.
Posted by Chris Stufflestreet at 8:30 AM