Here's a neat card in my collection than many haven't seen before: 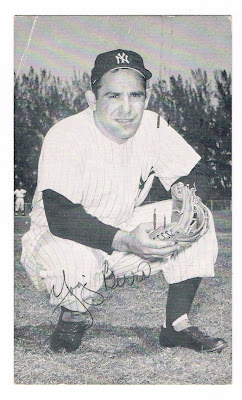 I've never been much of an autograph collector. The few signatures I own are either things I specifically had signed at shows or have ended up in my possession through trades or other hobby doings. This Berra was something I acquired through a "take a card, leave a card" box that I once received and then sent on to another collector.

This ballpoint pen-autographed photo of Yogi Berra crouching in his familiar catcher's pose isn't exactly a baseball card in the general sense. It's a postcard. The back shows some additional details: 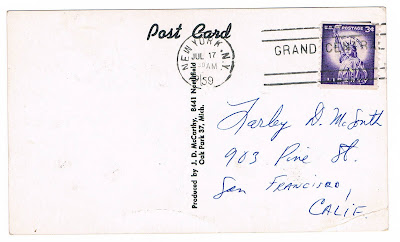 J.D. McCarthy was a photographer who took an awful lot of photographs over the years. While many of his pictures would wind up on Topps baseball cards through the years, he also sold player images to be used on hobby-only sets (mostly consisting of retired players and sold through SCD and other hobby magazines or sellers like Larry Fritsch) as well as postcards. On this website devoted to the Seattle Pilots, this little nugget was provided:

"Striking as McCarthy's work for Topps was, however, it is his postcards that have caught the eye of modern day collectors. If a player liked a shot McCarthy took of him, the player could order a supply of postcards made from the photo. These postcards, in turn, were used for responding to requests for autographs."

It appears this photo of Berra was one of those postcards. When a particular fan in San Francisco wrote to the Yankee catcher in 1959, he took one of those McCarthy postcards, autographed his name onto it and mailed it as a keepsake. Or he gave a stack of pre-signed postcards to an employee of the New York Yankees to send back to any fan who sent mail there. While I'm not sure about the method, I'm guessing a team secretary wrote out the fan's home address (though I'm not an autograph expert, perhaps somebody can tell me for sure...any Yogi Berra handwriting experts out there?).

In any event, it's a cool piece that shows how players expressed appreciation to their fans more than 50 years ago.
Posted by Chris Stufflestreet at 8:30 AM