I love 1950s baseball cards. In fact, ever since I was a kid I've wanted to get one of those sets completed.

The 1955 Topps set is probably my best bet. As a small set (206 cards in all) without a Mickey Mantle card, it appeared to be the one I'd have the safest shot at finishing up. Sadly, all ten cards I still need feature Hall of Famers so I may be chipping away at this wantlist for quite some time:

For somebody like myself who isn't going to hand over huge bundles of cash for his cards, I'll keep an eye out for the occasional deal on the right card. While I'm really glad that I don't need to add a Mickey Mantle card to the set, many of these cards -- especially Clemente, Mays and possibly Koufax -- are going to be pricey even in well-loved condition.

That's not to say there aren't bargains to be found. The list above is missing one Hall of Fame rookie card, which I picked up at a Chicago National a few years back for $15: 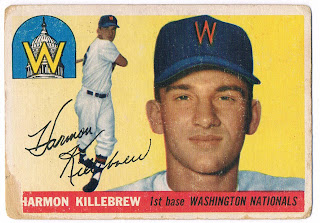 In my opinion, I'll take a little paper loss for $15. It's a great deal for a 1950s HOF rookie card even if it isn't exactly pretty. If I see another one at the same price, I'll pick it up too and use it as trade bait for one of the others above.

Another card I picked up for my set for less money than you might expect was this high-number Hall of Famer: 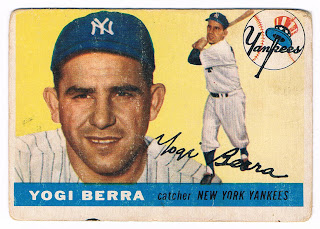 Rounded corners, miscut, some added wear...no matter, he's a Yankee, a Hall of Fame great and a '55 Topps high number.

Of course, 1955 was the year the Brooklyn Dodgers finally realized that "Next Year" had arrived. Here was one of the regulars of that celebrated team: 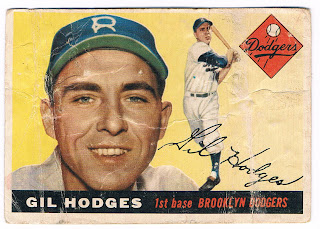 Again, not the prettiest example. This Hodges card looks like it might have followed him in Okinawa in '45 as he fought his way through as a U.S. Marine. It's creased and beaten up, but 1955 Dodgers are always sought after, even by lower-grade collectors. Someday I'll upgrade this one and have no doubt I'll immediately find this Gil a new home when I do. Adding this high-number Bum to my collection for only $5 was a no-brainer.

While I'm whittling down the list of cards I need for this set, I realize it's a lot harder when I don't have deep pockets. That said, there are deals to be had out there. All I need to have is some good luck and perseverance, and I'll finish it. Someday.

And when I make any progress, I'll gladly share the new additions here.
Posted by Chris Stufflestreet at 8:30 AM

Email ThisBlogThis!Share to TwitterShare to FacebookShare to Pinterest
Labels: 1955 Topps