From time to time, I'll feature a set that's on my Vintage Baseball Cards website and expand on it, using cards from my own collection, rather than simply using the cards on the site itself. This time around, I'll take a look at the 1959 Topps set. 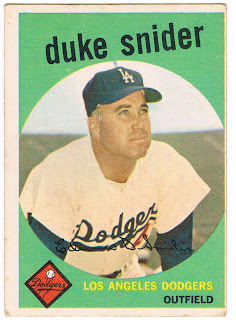 For the fourth consecutive year, Topps expanded the number of cards in its set, making the 1959 set its first with over 500 cards. The set features a sharp design that most collectors like and is loaded with specialty cards. It also has variations, goofs, errors and a somewhat tough but not impossible high-numbered series (507-572) to keep collectors busy trying to complete it. 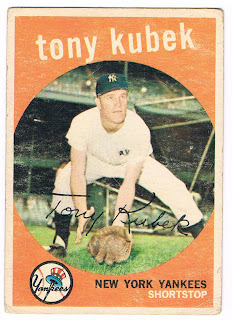 Topps had a unique front design for its '59 set. A player's picture appears in a circular photo cut by the white border which frames the card. The rest of the card features a bright-colored background. The player's name appears in lower case letter above his picture, slightly tilted to the left. Below the player's picture are his team name, team logo and position. The only thing covering the player's photo is a facsimile autograph.

One thing noticeable about the cards is the way the background color changes. Duke Snider is shown above with a sea green color, as well as Tony Kubek with orange. Here's a red color (shared by many Yankees players...but I've already shown Kubek and there are already cards of Mantle, Ford and Berra all over the Web already): 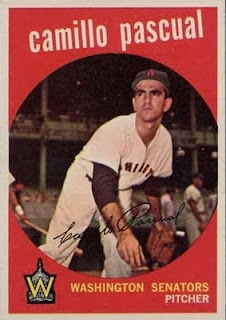 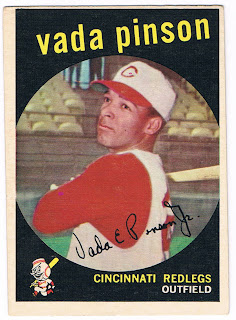 Black should logically be followed by blue: 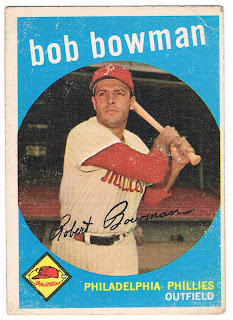 And then there's the ever-so-manly pink background: 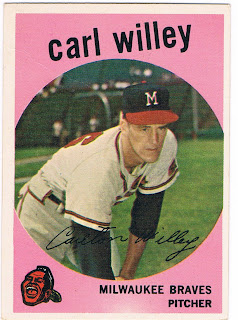 There's also a yellow background, but I'll share that one a little later.

Card backs show year-by-year career statistics once again (Topps had used only past year and lifetime numbers in 1958), with a short written comment added where space permitted. The top of the card back features the card number inside a box, player info in an adjoining box, and a cartoon spotlighting one of the player's accomplishments. Cards #199 through 286 can be found with either white or gray cardboard stock, and here's a sample of each: 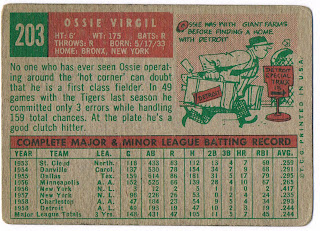 For the sake of showing the difference, I'll even use two cards that are numbered back-to-back. In my opinion, the white card stock is better because the info is much easier to read. 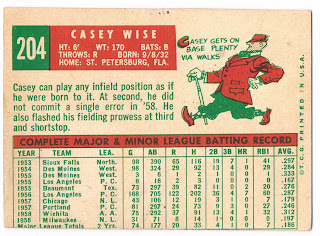 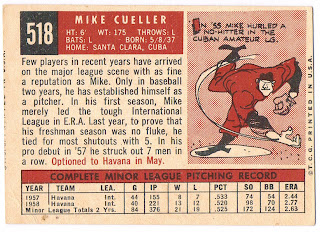 Topps brought back some of the novelties of its 1958 set. Multi-player cards return, with players set against a 2-color background with a solid circle that lets collectors easily identify them as '59 Topps cards. 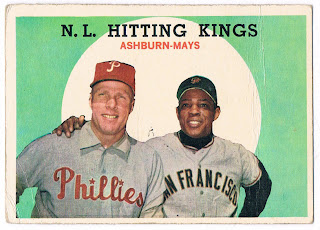 A similar background can be found on team cards, along with team name and logo.  Here's the Yankees team card (a high number card, which likely irritates collectors who find the team's cards expensive enough): 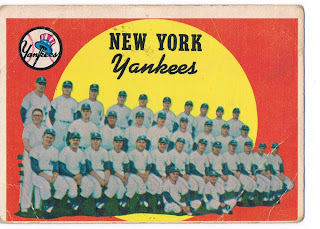 Checklists once again show up on the backs of team cards as they did in '58. Topps also brings back cards featuring baseball executives; card #1 is Topps' first card of baseball commissioner Ford Frick, and card #200 features N.L. president Warren Giles. This must have driven the kids at the time quite mad, considering they didn't belong to any team and were just old men who were analogous with the teachers, principals and parents who often stopped long enough to confiscate their cards. Both executives have the same red, white and blue background with a baseball design: 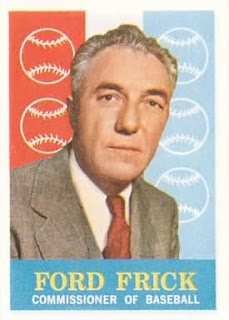 All-star cards also return in '59 and for the second consecutive year, they are the final cards in the set. The same two mangers who shared a card in '58 (Casey Stengel and Fred Haney) are back but this time each has his own all-star card. There are different designs for the All-star cards; players are pictured inside a shield, with an eagle adorning the shield. 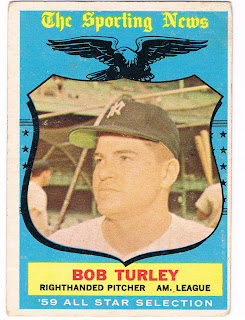 (Sorry it's another Yankee...right now, Turley's one of two American League All-Stars I own and the other is thrashed).

National League All-Stars are set against a red background: 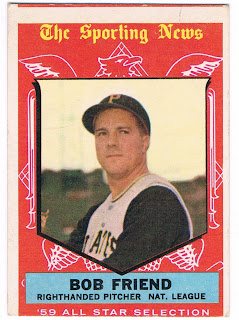 For the first time in any card set, a special subset appears showcasing many of the season's rookies. Cards numbered 116 through 146 feature a much different design than the rest of the set. The "Sporting News Rookie Stars" subset features a player picture with a background of red, white and blue stripes on a black shield. Players are arranged alphabetically by last name, and have the same back design as the rest of the set. Of the 31 rookies featured, only a handful stayed in the major leagues, and some never played an inning. Nonetheless, the "rookie stars" subset would become a fixture of Topps sets for the next quarter century. 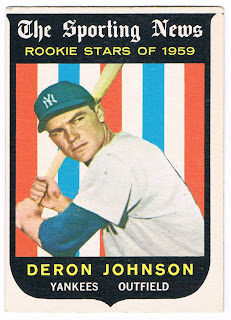 While few of the named rookies became stars, two regular cards in the set featured first-year players who went on to become Hall of Famers: Bob Gibson and George ("Sparky") Anderson (who made it in as a manager).

Another subset that would show up in later Topps sets makes its first appearance in cards numbered 461 through 470. Titled "Baseball Thrills," these ten cards spotlight some of the celebrated feats of the previous five years, and resemble the 1958 Topps specialty cards more than any from the '59 set. Collectors who are familiar with back design should be able to tell the difference. Most of the players shown on these cards are superstars like Mantle, Aaron, Mays and Musial, but some lesser stars like Rocky Colavito are featured as well: 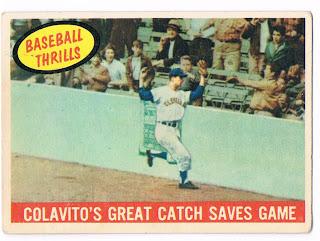 Roy Campanella has his last Topps card in this set, another specialty card in the high series titled "Symbol of Courage." Card #550 shows the soon-to-be Hall of Famer in his wheelchair (he was tragically paraylzed in a December '57 car accident). 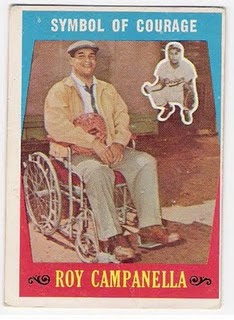 Several variations appear in mid-series cards. During that era, Topps often took advantage of the fact that its cards were printed in series by notating trades, options and releases on card backs whenever time allowed. Five cards numbered 316 through 362 exist with and without lines on the back. Early print runs do not have the notations and are the scarcer variations. Among the five, #322 Harry Hanebrick is among the toughest cards of the 1950s to find in top condition. Another variation involves Warren Spahn, with three different variations on his year of birth.

Kids have always enjoyed finding errors, typos and goofs on their cards, so the kids of 1959 must have been especially busy. Camilo Pascual (see his card above) has his name misspelled "Camillo" on his own card and is the player pictured on teammate Ralph Lumenti's card (Lumenti is one of the players with the "option" variation). 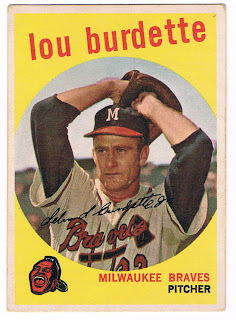 Perhaps the best known card of the '59 set is #440 of Lew Burdette for two reasons. First, Topps spelled his first name as "Lou," an error they never corrected and made again in 1960. Second, Burdette had some fun with the Topps photographer; when posing for his picture, the right-handed pitcher grabbed teammate Warren Spahn's glove and posed as a lefty (According to the story, Spahn posed as a right-hander with Burdette's glove but Topps never used the photo). According to Topps legend Sy Berger in an interview, the picture got past Topps' proofreaders, but didn't fool hundreds of kids who wrote in to let them know they messed up.

Finally, collectors who truly enjoy collecting 1959 Topps can occasionally search out other items, such as packs, wrappers and boxes. The wax packages were sold in boxes that looked like this one: 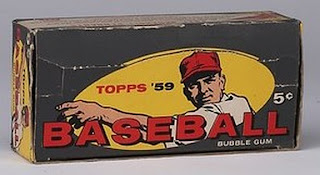 Having the year showing is helpful, but note the way the player is shown inside a circle, just as he would be on a 1959 Topps card. The same design shows up on the penny pack below: 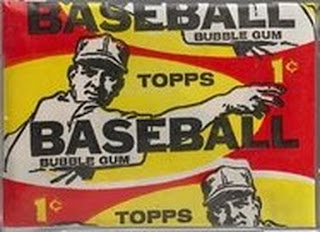 There was a second design for penny packs in 1959 as well, with a batter: 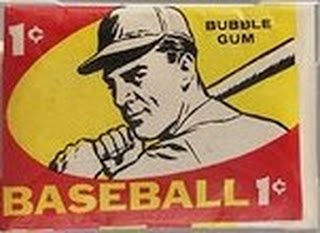 The same batter design would be part of the nickel pack: 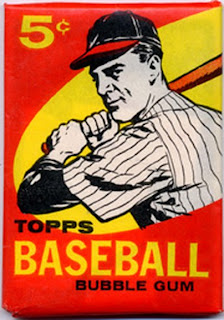 And note the way the solid circular shape in the background is a consistent part of the design.

This was a much longer blog entry than I usually do, but the 1959 Topps set was loaded with all kinds of surprises for the kids handing over their pennies and nickels that year to buy them. Even after more than a half century since they were printed, shipped, purchased and opened, they are a great set to put together.
Posted by Chris Stufflestreet at 8:30 AM