Cards were sold along with many products over the years. Most collectors know that early cards were sold with tobacco products and many of us remember when they came with a slab of gum. They've also been used to sell caramel, candy bars, cocoa,cheese, snack cakes, potato chips, milk, cereal, hot dogs, dog food...

Yes, it did. Red Heart was a brand of dog food sold in the 1950s through the 1970s or so. They even ran ads like this one in Life magazine:

The makers of Red Heart figured that families with dogs probably also had kids as well, so it should be easy to sell cards by placing ads on their cans so they'd be easily seen when it was time to feed ol' Rover his liver-flavored dinner. So, in 1954 they offered series of cards in exchange for labels.


There are 33 cards; the set was available in three unnumbered series of 11 cards each. Each series has a distinctive solid background behind the player.

There were cards with blue backgrounds: 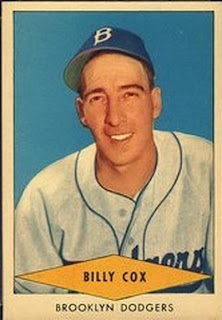 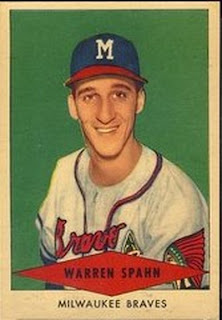 The other series featured red backgrounds: 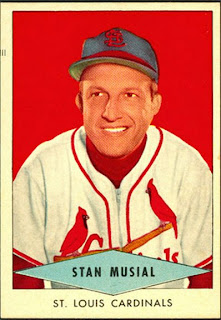 Cards with red backgrounds are somewhat scarcer than those with blue or green backgrounds. Card fronts feature a hand-colored player portrait over a solid background. The player's name is inside a diamond-shaped box below his picture and his team is listed at the bottom as part of the card's white border.

Card backs feature the player's full name, position and team name above detailed biographical info. The player's 1953 and lifetime statistics and a Red Heart advertisement are also prominently displayed. An example back is shown below: Though the mail-in offer on cans of dog food was begun in 1954, it has been said that these cards were still available to those who requested them as recently as the early 1970s. The fact that they were still available two decades after its promotion had run caused a lower demand for the cards for years, but they've come to be seen in the hobby as a classic set.


While the set is full of stars, there are two key cards: Mickey Mantle and Stan Musial (neither appear in the 1954 Topps set; Musial wasn't in the 1954 Bowman set either). Musial is especially tricky as one of the scarcer red background cards. While not as hard to find as other card sets of its day, the 1954 Red Heart set is still popular. It has a nice design and classic look that is appealing to many collectors.
Posted by Chris Stufflestreet at 8:30 AM