Over the weekend, this site popped up on the Web:

It's a resource to help understand the subtle nuances of what we call the T206 set, and also a tool to help solve some of the puzzles that are still presented by that set more than 100 years after it was issued in several brands of tobacco products. Although Jefferson Burdick applied a generic T206 designation to what he referred to as the "White Border" set, it was actually a series of interconnected sets that was issued with a wide variety of brands. In effect, it was several sets (since each brand differed in who was featured) united by a front design.

One part of the site that I found interesting is this one that contained several articles about the set. As an information geek and a writer of a handful of hobby articles myself, it's nice to see anything that compiles info in one handy location.

There's also a gallery section. Not only are the individual cards, the checklist and the different backs featured, but some additional items such as proofs, print advertisements and even the source photos.

Here's an example of an advertisement: 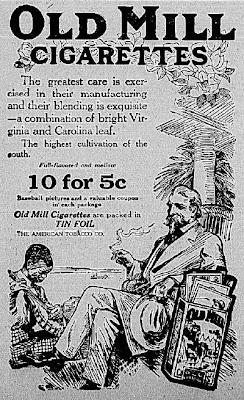 The picture in the ad may be seen as inappropriate today, but keep in mind that in 1910...the Civil War had ended just 45 years before. However, notice that the picture in the corner shows more than one card included in the cigarette pack. I believe there were actually two cards in each Old Mill pack.

There are some interesting photos as well. Take a look at this one: 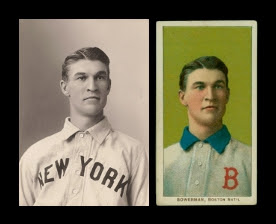 Notice that the original photo of Frank Bowerman has him wearing a New York Giants jersey. He played there from 1900 through 1907, but went to the Boston Doves in 1908. In 1909, Bowerman was named the manager of the Boston team but was fired halfway through the season because of his foul temper. As you can see from the picture, his team affiliation was corrected by the artist.

Another picture (featuring the set's most famous card) shows that not every uniform had letters on them in that era: 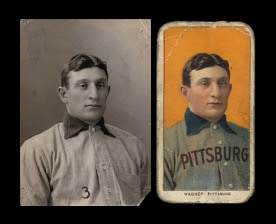 I have spoken with the owners of the T206 Resource site, and there are plans to add more information to the site as they get permissions, more submissions and additional photos. I've placed a link to the site on my sidebar, feel free to bookmark it and check back on it to see what else can be added.
Posted by Chris Stufflestreet at 8:30 AM

Email ThisBlogThis!Share to TwitterShare to FacebookShare to Pinterest
Labels: t206