Last week, I showed the backs of the "In Action" cards from the first series of 1972 Topps. In the second series, there were also 12 "In Action" cards, with six of them repeating backs that showed the features planned for series 3 through 6. The other six cards looked at the past: 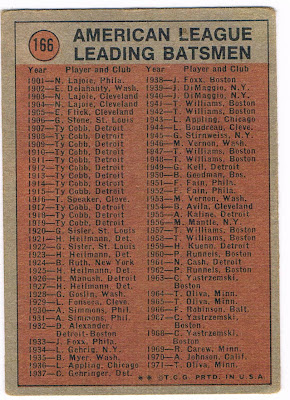 Two of the cards showed the batting leaders through the seasons, one for the American League (above) and another for the National League: 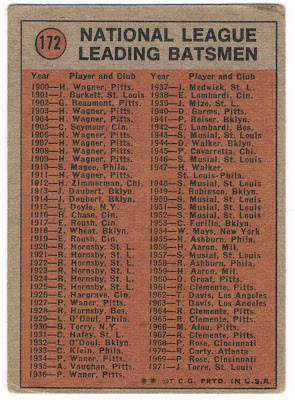 It's a shame there wasn't enough space to fit the averages on the card, though. That would have been interesting to see how batting .400 was fairly common in the first few decades of the 20th century, especially considering the lower averages in the late 1960s.

Two of the cards featured the top pitchers, based on their ERAs, and this time the numbers are included: 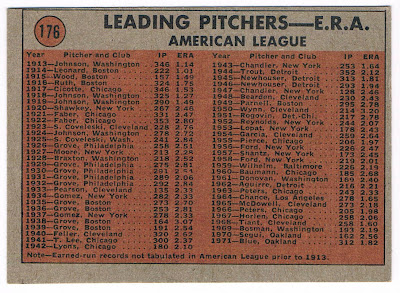 Once again, the American League leaders are above and the National Leaguers are below: 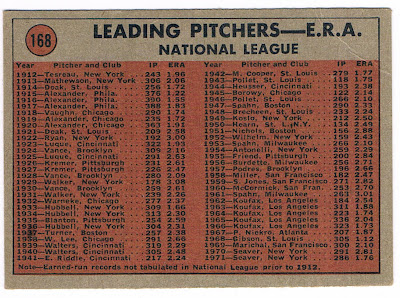 The stats omitted results prior to 1913, but those have since been tabulated by baseball historians and can be found on Baseball-Reference's site. What's interesting is that in 1971, the leading pitcher's ERA was under 2 in both leagues. That was accomplished again in 1972, but never again.

Finally, there were two cards that showed the pennant winners: 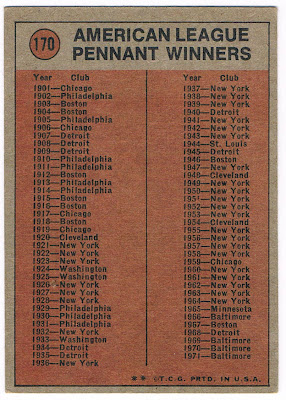 As you might expect, the New York Yankees are named frequently. However, it's worth pointing out that during the league's first two decades, Boston and Philadelphia were the stalwarts (with Detroit and Chicago getting the rest of the pennants). 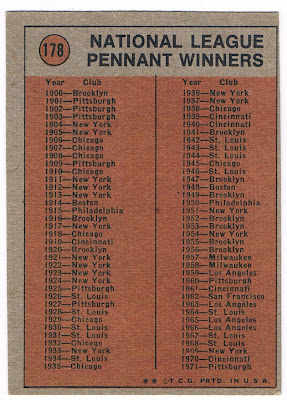 Here's something you may not have known: Brooklyn won the National League pennant (and the World Championship, by default) in 1900. They also won it in 1899, but that isn't shown on this card. So, 1955 really wasn't their first time with a title...but it was before the American League appeared, so for whatever reason, it isn't considered to be "legitimate." If I were a Brooklyn fan, I'd argue that it definitely was.
Posted by Chris Stufflestreet at 8:30 AM