More New Arrivals For the Collection

Christmas isn't here yet, but the beauty of collecting is that it's a year-round pursuit. In that sense, Christmas can happen just about any day the mail arrives.

Here's a couple of cards I recently added to my collection: 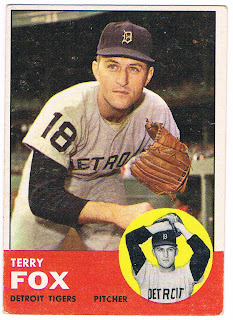 1963 Topps #44 -- Terry Fox, Detroit Tigers
Terry Fox was Detroit's closer during the early 1960s. In 1961, Fox delivered the pitch that would become Roger Maris's 58th home run. It was hit in the 12th inning and was one of only 5 games that year (and the first since June) that saw him pitch for at least 3 innings. While that was a rather negative "highlight" of the year, Fox ended up notching a 1.41 ERA and was a very important cog on a Tiger team that finished in second place and was still contending late in the season. 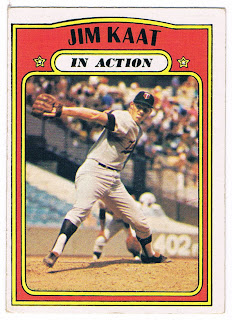 I like the In Action cards of 1972. There were 12 cards in each of Topps' six series that year, with every one being featured numerically after the same player's base card, and set within its own part of the series. That's right, each series had a 24-card subset that was base/action/base/action. Each series had its own feature on the back of the "In Action" cards, too:

Series 1 - Previews of specialty cards in upcoming series (though these appeared in later series as well).
Series 2 - League Leaders and Pennant Winners through the years.
Series 3 - "So You're a Baseball Expert": game situations where the owner guesses the ump's call.
Series 4 - Highlights of 1971.
Series 5 - Puzzle cards of Joe Torre and Carl Yastrzemski.
Series 6 - Puzzle cards of Tom Seaver and Tony Oliva.

I should probably make this an article for a future blog entry.
Posted by Chris Stufflestreet at 8:30 AM