Today, I'll feature this item from my Steelers collection: 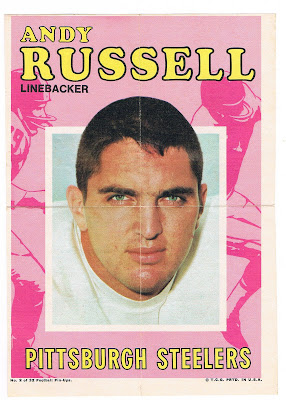 It's a 1971 Topps Pin-Up and was inserted into wax packs of that year's football cards. While I usually have no problem with damaged cards, the two creases you see here are found on these, as they were folded twice to fit in the packs.

I will interject that there could have been a better color choice for the card than pink. I know Topps was a company that made its money selling bubblegum, but pink has little place in football. It's like crying in baseball.

Here's the back of the Pin-Up, which has a field and instructions for a football game: 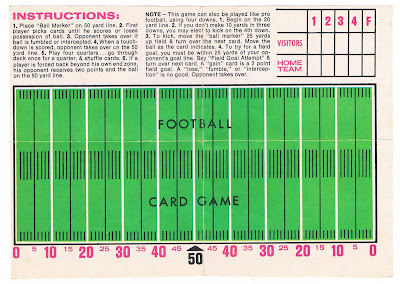 If you right-click the image, you can read the rules and see how the game was meant to be played. I have a couple of questions, though: where the rules mention that the game is played with a "Ball Marker" (as it's called in the instructions), does that mean a game piece was also included in packs...or were the players simply encouraged to use something laying around, like a penny or a piece from the Monopoly game every house seemed to have? Also, I notice that the rules don't say anything about a clock.

One thing I do know...is that the rules mention using cards to determine game play. Those cards were also included in Topps wax packs during 1971: 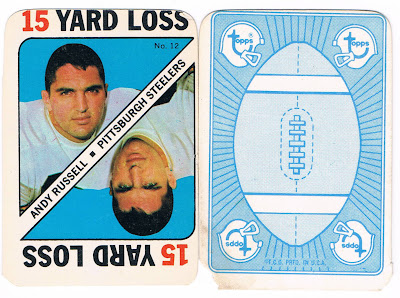 They even used the same picture on both items for Russell. But longtime Topps fans know they were very good at recycling their images.
Posted by Chris Stufflestreet at 8:30 AM