The Basketball Card That Wasn't

This card is considered to be one of the "first" basketball cards, but wasn't issued as one: 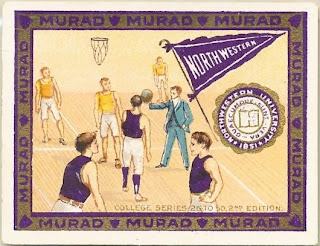 This is a T51, issued with packs of Murad cigarettes in 1911. Called "College Series" the set was issued in six groups of 25. They showed activities at several colleges and universities, and four of them (Northwestern is shown here; Xavier, Luther and Williams were the others) just happened to show basketball games.

Basketball was invented in 1891 by Dr. James Naismith as a physical activity that can be played indoors as a rainy-day (or snowy-day, considering he was in New England) activity. The original "basket" was a peach basket nailed to the wall; later hoops are like the one shown in the picture above. Since a stick was needed to retrieve balls after each score, the bottom of the net was eventually cut to allow balls to pass through.
Posted by Chris Stufflestreet at 8:30 AM