Thanks to some credits I had on Amazon, I went and picked up this book recently for my own collection: 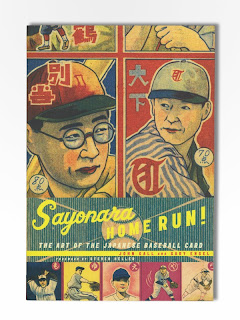 Sayonara Home Run! by John Gall and Gary Engel
I have written a few articles about Japanese baseball cards in the past (most notably this one), where I mentioned the book above. I also showed off what is still the only Japanese card in my personal collection: 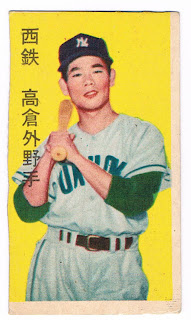 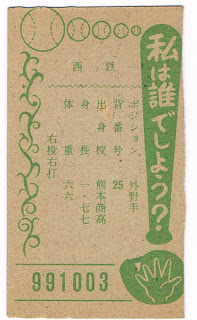 While that card isn't shown in the book, I did learn a little more about it. While I knew it was a Menko card and had several game elements on the back, the book explained that these particular cards are also called "Tobacco" Menkos, because they're similar to what American collectors know as T-series cards. They were not, however, issued along with any tobacco products. They're called that to differentiate themselves from Menkos from the late 1940s through the early 1950s, which used cartoon-style artwork rather than photographs.

This book isn't an in-depth reference book, nor is it intended to be one. Instead, it's an introduction to a new "world" of cards from another country, where baseball is considered as much of a National Pastime as it is here. Hundreds of cards are pictured, going back to postcards from 1913 that featured collegiate players. It goes from there through the World War II era and then the two main eras of Menko cards in the postwar years. It also delves into the cards issued with gum and candy products, as well as those that were part of games. They also cover Bromide cards of the era, which show photos on them and were sometimes available as bookmarks.

Along the way, players are spotlighted, from Russian-born Victor Starffin to Sadaharu Oh. Sections talk about the early influx of baseball into Japan, the exhibition tours of American teams into the country and the proliferation of gaijin (foreign-born players) later on. While the "meat" of the book featured images of baseball cards, the extra information fills in the details about the subject.

Here's a link to pick up a copy if you're interested:

Here's where I get to the rest of the story...

When I ordered this book, it arrived in defective condition. The cover had come off from the body. The seller (Diane Publishing of Darby, Pennsylvania) immediately sent me a new copy that was intact. I couldn't finish this review without pointing out their act of customer service. I've ordered stuff through Amazon for years and have never had this problem before; their quick fix was something I never expected.

But...now I have an extra copy of this book (they wouldn't take it back since it was defective). If you're interested in the subject, I'll offer my defective copy as a giveaway this weekend. If interested -- and unconcerned about the removable cover -- leave a comment below and I'll do a drawing on Sunday night.
Posted by Chris Stufflestreet at 8:30 AM