(This is another post that basically rehashes the material I wrote on my "regular" site. Here's the page where this info was pulled.)

Ever since baseball cards have been produced, they have often been used as promotional products. From the beginning, they were designed to entice baseball fans to buy certain products in an attempt to find cards of favorite players or work towards a complete set of cards. The list of products that have included baseball cards over the years is quite long; they include cigarettes, cocoa, caramel, gum, candy bars, ice cream, cereal, dog food, snack cakes, root beer, potato chips and hot dogs. In the early part of the 20th Century, a few newspapers also used baseball cards to help sell more issues.

In 1911, there was a fierce competition between The Sporting News and Sporting Life, and much of that competition centered on coverage of major league baseball. During this period, Sporting Life used a set of baseball cards as a premium to subscribers. In order to collect the cards, readers would have to send an advertisement to the paper and have the cards mailed back. The cards were available in 24 series (12 cards in each series) issued throughout the season. Although there are 287 different players featured in the set, advanced collectors will consider the set complete at 310 cards.

Although the cards in this set -- like many other issues during this period -- resemble T206 cards in design, there are some differences. The M116 cards are an eighth of an inch taller than T206 cards, use a different lettering style, and player pictures (often similar to T206 photos) are less vivid in color. Most notably, the backs of an M116 card carries one of three different advertisements for Sporting Life. Card fronts feature a hand-colored portrait photo of the player surrounded by a white border, with the last name and team city below. 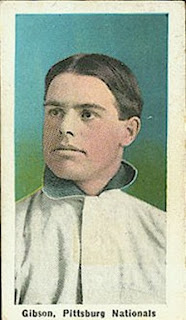 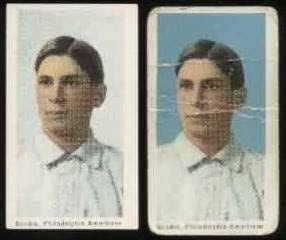 There are three types of backs. They were largely dependent on the series, but there's a breakdown on the Old Cardboard page about the set.

The card of Jimmy Walsh can be found with either a grey or white background. Two players (Amby McConnell and George McQuinlan) had new cards issued late in the season to reflect trades, and cards featuring them with their new teams are quite scarce. Because of the way the cards were issued, the last six series (available during the waning days of the baseball season) are much harder to find than the earlier series.

While The Sporting News is still a highly respected publication today, the editors of Sporting Life closed up shop by the the time the U.S. entered World War One.
Posted by Chris Stufflestreet at 9:09 AM

Email ThisBlogThis!Share to TwitterShare to FacebookShare to Pinterest
Labels: m116