Advanced collectors will know the design right away, but these cards are vastly overshadowed by other cards of the era: 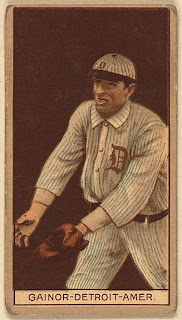 But it's not because they're scarcer. Well, they are, but they're not as tough as many of the more regional tobacco issues.

Called "Brown Background" because of the sepia backdrop behind the players on its cards, the T207 set is not as widely collected as many other tobacco issues of its day. This lack of popularity among collectors is due to several factors; compared to other T-series tobacco sets there are fewer stars, less color and an unimaginative design. Despite these negatives, T207 presents a challenge for collectors because it contains several cards that are incredibly scarce.

The cards, measuring the same 2 5/8 inches by 1 1/2 inches as cards in the T205 and T206 sets, feature a somewhat dull front design. They were issued in 1912, at the end of the mainstream T-series tobacco period. Players are featured in sepia and white drawings with a solid brown background. A tan border runs around the card, while a white strip at the bottom contains the player's last name and team city. A thin black line separates the picture and white strip from the outer border. Card backs feature fairly lengthy player biographies below each player's name. Like most T-series issues, an advertisement appears at the bottom. Also like many of its contemporary sets, T207 cards were distributed among several brands. T207 back advertisements include Recruit, Broadleaf, Cycle, Napoleon and (the incredibly hard to find) Red Cross. There is also an "anonymous" back. 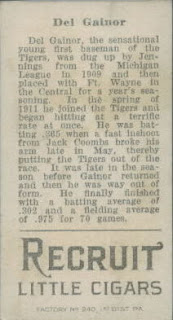 (This one isn't mine...but the back is the same as the one I have)
Stars in this set include Walter Johnson and Tris Speaker, as well as a small handful of other Hall of Fame players, but many stars (such as Christy Mathewson and Ty Cobb) do not appear here. There are, however, several degrees of scarcity in this set: Irving Lewis, Louis Lowdermilk and Ward Miller are especially valuable because they are so scarce. Additionally, there are several other cards in the set which are harder to find than others; however, since names like Ralph Works, Victor Saier, Arthur Rasmussen and Morris Rath do not really excite many collectors, they are not the source of much collector interest. For the collector who enjoys a challenge, T207s offer the chase without the price extremes found among more mainstream T-series sets.

Despite the lack of collector interest in this set, it is harder to find T207 cards than T206 or T205 cards, and even its commons are slightly more valuable. Fortunately for collectors of this set, a lack of information about these cards sometimes results in heavily underpriced T207 cards on the market (For instance, I bought the example card shown above for eight dollars at a card shop in 1994 because the proprietor had no idea what he was selling).
Posted by Chris Stufflestreet at 8:30 AM

Email ThisBlogThis!Share to TwitterShare to FacebookShare to Pinterest
Labels: T207