1953 Bowman (and its Overlooked Kid Brother)

After a few years as the leader among gum companies issuing cards, the Bowman Gum Company was effectively blindsided by the onslaught of Topps in 1952. As a result, they went all out to make a better set in 1953. In the opinion of many hobby experts, the 1953 Color set is Bowman's most accomplished in that it may actually be a better issue than one Topps issued that same year. There is some debate about that, however, because the '53 Topps set is considered to be a nice set as well.

For the first time, full-color photographs were used, instead of the hand-painted pictures that had been in use for several years. Bowman used the most basic card design possible in its 1953 sets: just a photo of a player, a white border and a black line separating the two. There are no names, positions, team logos or facsimile autographs anywhere on the card front. Going back to its days as Gum, Inc., this was actually the fourth time the company resorted to a picture-only design for a baseball card issue, but the sharp photography really made this set stand out. This uncluttered design has made this set a classic that is still considered one of the best-looking sets ever produced. Here are two of the cards from my own collection: 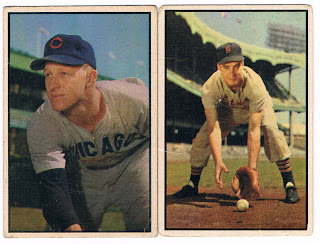 In response to Topps' larger cards, Bowman increased the physical dimensions of their cards to 2 1/2" by 3 5/8". They were just as tall as the one Topps sold, but slightly thinner. The competition took its toll, however; Bowman spent so much money in production costs with the color cards that instead of a new series of cards later in the year, they put out a small set of black and white cards. Among my collection are these two Hall of Famers: 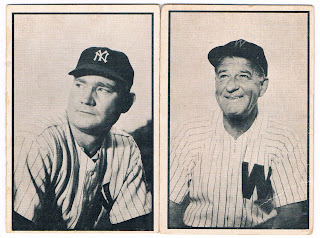 The 1953 Bowman Black and White set is similar in all respects to the color set, except that player photos lack color. Even the card backs are similar; however, rather than continuing the set at card #161, the black and white cards are numbered from 1 to 64. Despite seeming like a low-cost, lesser version of its more famous "sibling," Bowman Black & White cards are scarcer and sometimes more expensive than their color counterparts. While there are fewer stars and their lack of color doesn't make the photos as bold, they are still attractive. Casey Stengel, Johnny Mize (shown above on the left) and Hoyt Wilhelm highlight this set.
Posted by Chris Stufflestreet at 8:30 AM