Say you're a fan of a team and they get a hot rookie who doesn't show up in that year's card set. Then, let's say your rookie becomes a starter or joins the rotation. If you like to have your cards to be as up-to-date as possible, what do you do?

Today, this isn't as much of a problem. With eBay and traders who are linked via the Internet as well as staggered card issues, it doesn't take all that long to locate a card that will show your team's new addition. However, in 1956 collectors didn't have eBay, the Internet or many other devices at their disposal. They also didn't have several sets per year, nor the proclivity for preserving cards in top condition that many collectors exhibit nowadays. Therefore, you may find stuff like this: 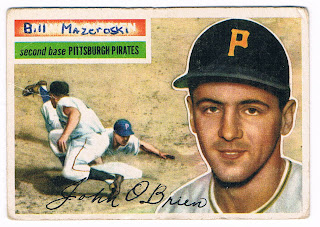 Johnny O'Brien was famous to 1950s card collectors for sharing a 1954 Topps card with his brother and teammate Eddie. However, in 1956 he lost the Pirates' starting second baseman job in midseason to a 19 year-old newcomer named Bill Mazeroski. Since Maz didn't get his first Topps card until '57, it necessitated an eraser to remove O'Brien's name and a blue ink pen to make a one-of-a-kind Mazeroski "rookie card."

But the updates didn't stop there. 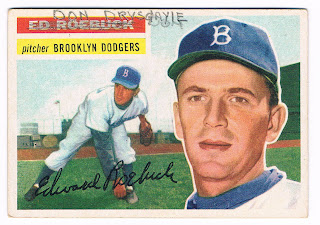 Unlike O'Brien, who lost his job as an everyday position player, Roebuck was still an active cog of the Dodger pitching machine and would remain with the team for several years after the move West. However, as a spot reliever he wasn't quite as visible as another 19 year-old newcomer named Don Drysdale, who was taking the mound in '56 as both an occasional 5th starter and as a reliever. However, he also didn't appear on a Topps card until 1957. Perhaps the original owner had this Roebuck as a duplicate and figured there would be no problem changing it to become a unique "rookie card" of an eventual Hall of Fame player.

Final note: both of these cards are duplicates for me (actually, I've picked up versions that weren't given any after-market adjustments). If any reader would like to give one or both of these guys a home, drop me an email.
Posted by Chris Stufflestreet at 8:30 AM