In 1969, Topps included insert cards in a few series of its wax packs. The cards looked like old photographs from a family album, with scalloped edges. Known as Deckle Edges, the cards look like this: 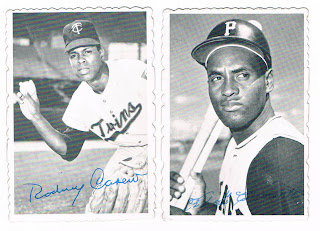 There were 33 numbered cards in the set. However, trades forced two players to be dropped and replaced with others to keep at least one player per team in the set...even though the team wasn't actually listed on the card. Card #11 is either Hoyt Wilhelm or Jim Wynn, and card #22 is either Rusty Staub or Joe Foy. As a result, there are 35 different players in a complete 1969 Deckle Edge set. As of right now, it's also the only set from before my birth I've managed to complete.

The two cards above once belonged to a young collector named Tony Havens. I've never met Tony nor have any idea where he lived. Tony didn't trade me these cards...so how do I know they were his? 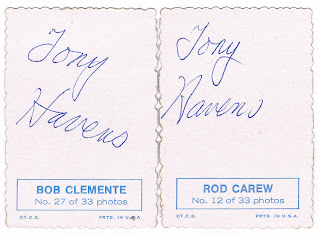 The cards told me.
Posted by Chris Stufflestreet at 8:30 AM