A Loss in Our Little Fraternity

Last year, I featured these cards, which led to my very first giveaway on this blog:

In that post, I mentioned these cards came from another trader (who wasn't a blogger). With these cards -- which put me past the halfway point in the 1952 Topps set -- he also sent this one, which was a signed mock-up of a book about a player whose World War II story is inspirational: 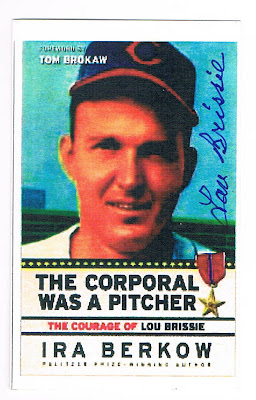 These were sent to me by a trading buddy named Ryan Diselrath.

Today, I received a message that Ryan passed away last month. He was only 31 years old. Here's a link to his obituary.

What that article doesn't tell you is that Ryan had some issues with seizures. One of those seizures in 2007 ended up making him a quadriplegic with only limited use of his left hand. Despite that, he still collected. He really enjoyed the cards, even the ones that weren't anywhere near pristine. He also lived his life to the fullest extent possible...which is an admirable thing to do in any situation.

I realize very few who read this will have had any interaction with Ryan. But as a member of our little fraternity of collectors, it's sad news indeed.

Rest in peace, Buddy.
Posted by Chris Stufflestreet at 8:30 AM