After spotlighting the 1941 Double Play set a couple of weeks ago, here's one of the other National sets of that great season. Again, the text largely comes from my own website:

At the time, 1941 was a great year for baseball cards. Collectors -- for the first time in years -- had a larger selection to choose from, with Gum Inc.'s Play Ball set, the Double Play set from Gum Products (a different company than Gum, Inc.) and this final effort by Goudey (its first in three years). It was also a tremendous year for Major League Baseball, with Joe DiMaggio hitting safely in 56 consecutive games and Ted Williams hitting .406 to win the American League batting crown.

The connection between the 1941 baseball season and the 1941 Goudey set probably explains why this set would prove to be Goudey's last: Ted Williams and Joe DiMaggio -- arguably the two best players that year -- show up in the other national sets that year, but nowhere in this set. As 1941 came to an end and the United States entered World War II, many of the supplies used for the manufacture of both baseball cards and chewing gum would be needed for the war. The Goudey Gum Company, long in decline, disappeared altogether from the ranks of sports card manufacturers once the war was over and production resumed.

1941 Goudey cards came one to a wax wrapper, joined by the ever-present piece of gum. The price: one shiny copper penny. The wrapper looked like this: 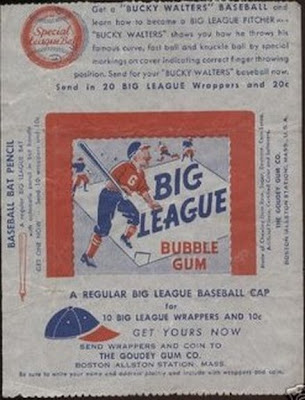 If you look closely at the wrapper, there are several offers available for collectors in return for sending back wrappers and a little bit of money. These were ways for card manufacturers to make a little extra revenue while encouraging kids to keep buying their product.

Overall, the 1941 Goudey set can be fairly labeled unspectacular when compared with its competitors' sets. Of the 33 cards in the set, only two (Mel Ott and Carl Hubbell), feature Hall of Famers. On the other hand, some obscure players never had another card and are in demand by team collectors. Card fronts have a black and white player photo set against a solid background (blue, green, red or yellow). A baseball with the "Big League Gum" logo appears in the top corner, while a box along the bottom of the card contains the player's name, team, position, and the card number. Card backs are blank. Card #1 features Hugh Mulcahy and mentions at the bottom that he was the first player to be drafted into the Army.

Even if the design wasn't exactly imaginative and the player selection was unimpressive, there's something neat about viewing the set's various colors. Each card in the set was printed with all four backgrounds. The four background colors have varying levels of scarcity. Using George Case's card, here's the breakdown: 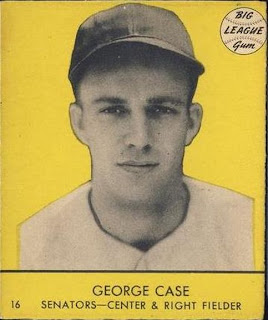 Yellow is (relatively) easy. I say "relatively" as 1941 Goudeys aren't quite as prevalent on eBay, in card stores or on dealer tables as 1941 Play Ball cards are. 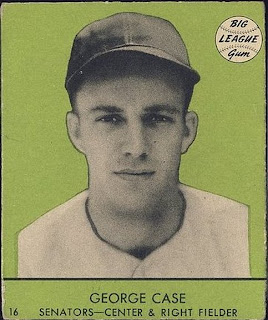 Green is also fairly easy (and the same stipulation I made about the yellow cards applies here, too). 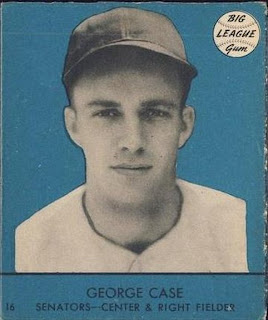 Blue is somewhat harder than either yellow or green. Also, the blue border seems to be susceptible to damage, like the right edge above. 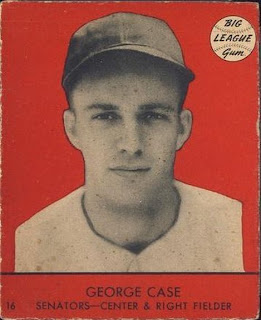 Red is the toughest color to find, and makes the player image pop off the card. However, its intensity makes top-condition cards tough. Like the blue version, you can see the wear on the right side of the card.

Although each player's card can be found with any of the four background colors, the set is considered complete at 33 cards; a few brave collectors have ventured to complete a 1941 Goudey master set with all 132 possible card fronts. A major concern for collectors is that many cards are found miscut and severely off-center.

Despite being the final baseball issue from Goudey, there has never been a great deal of collector interest in this set. Whether that is because of the lack of star players, the inferior design or the blank backs is anybody's guess. As a result, these cards do not show up in the marketplace often, and are not easily recognized when they show up. Cards #21-25 seem to have been printed in short supply, making them scarce cards in a hard-to-find set.

What probably hurts '41 Goudeys the most is the inevitable comparison to the company's other sets. 1933 and 1934 saw two of the hobby's best-loved sets come from Goudey, while the 1938 set was another winner. 1935 was interesting if unexceptional, and even though 1936 Goudey was bland and colorless, collectors could still play a game with them. 1941 Goudey offered much less than the company's other sets did.
Posted by Chris Stufflestreet at 8:30 AM

Email ThisBlogThis!Share to TwitterShare to FacebookShare to Pinterest
Labels: 1941 Goudey