From time to time, I get an email from a visitor to my website trying to figure out why the numbering of certain late 1970s Topps cards are messed up. The most recent was regarding a 1978 Topps Graig Nettles card #14; he already had Graig Nettles as #250.

This is a question I remember well from my early days in the hobby. There were frequent questions to the hobby magazines throughout the 1980s about 1977-'79 Topps cards and all of them had numbers 1-22. The question almost always ended with "how valuable is this error?" Kit Kiefer of Baseball Cards Monthly and Bob Lemke of SCD probably groaned whenever they saw these questions come in.

They may look like Topps cards and feel like Topps cards, but these cards were issued at participating Burger King restaurants. With any purchase of french fries, customers 14 and under would get a package of three cards and a checklist/promo card that looked like this: 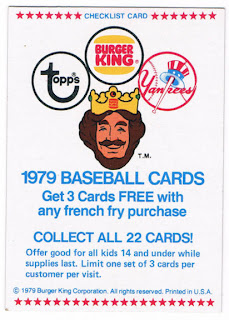 Most sets were regional issues distributed among the team's home city, but that didn't stop dealers from obtaining significant quantities through Burger King contacts or the time-honored "backdoor" method.

The 1977-'79 cards look almost like the regular issue Topps cards, with some minor exceptions. The two certain differences will take an incredibly trained eye to see. The first difference is the font used on the card number. Where a regular 1979 Topps card has a number looking like this: 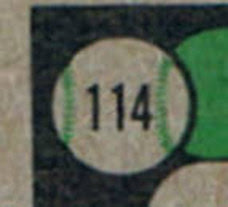 A card from a Burger King-issued set will have a thicker and bolder card number: 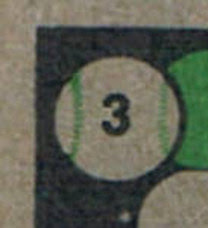 The other minor difference may escape even long-time collectors. From the late 1970s and several years afterward, Topps placed a letter from A-F on each card to indicate which of the six printing sheets used for the set contained it. The designation appeared on the back of the card, usually in a lower corner. Here's an example which shows that the card was part of sheet A:

For BK cards, the designation has been changed and no letter shows at all: 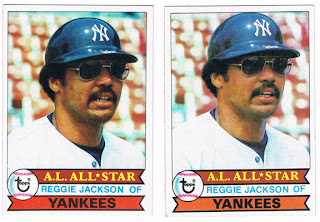 Not only is the photo a little darker on the Burger King card, Jackson's batting helmet is given some more space below the card's top border (perhaps Reggie just needed a little extra space to allow for his legendary ego?).

Some featured different photos, several showed a player with his new team (while the "regular" Topps cards showed the player with his previous squad). The 1979 Burger King Yankees had three such players: 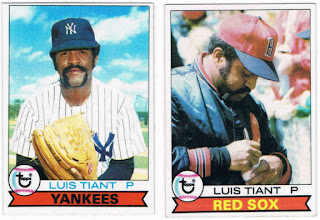 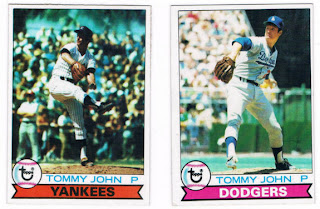 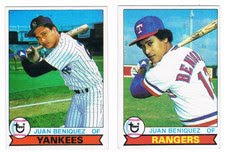 Additionally, one player had an entirely different photo: 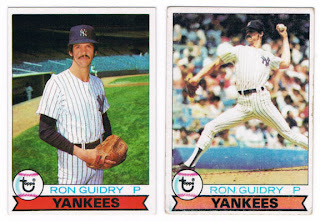 Some collectors will recognize the picture on Guidry's 1979 BK card as the same on Topps used on his Record Breakers card:

Collecting Burger King sets seems to have long been a hassle. Some dealers didn't know about them, while others just ignore them. Collectors have been confused because they are hard to distinguish from their Topps counterparts. However, the supply isn't a big problem and the low demand has translated to low cost for collectors.

This is what makes the cards collectible. A lot of collectors don't know they exist, a lot of sellers would be happy to get rid of them, and the low demand keeps their cost below the comparable Topps cards. They're not a great investment idea, but they'll look great in any collection. The final thing to show from the set is the back of the promo card, a set checklist that is slightly different from the Yankees' team checklist in the 1979 Topps set. 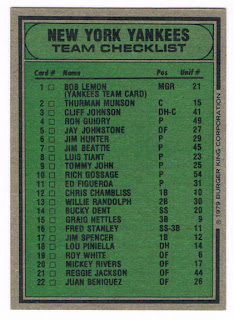 (For what it's worth...Jim Spencer's card is #17, the same number as in the regular '79 Topps set. There are likely some Burger King cards of Spencer sitting in '79 Topps sets that haven't been detected because nobody's really looked. Go look at yours, see if yours is one of them.)

While this post goes over the 1979 Yankee set, I'll feature the 1979 Phillies in a future post, since Topps actually did some very different things in that set with players who either came over from different teams (like Pete Rose) and others who weren't in the regular '79 set..
Posted by Chris Stufflestreet at 8:30 AM