This question gives me a chance to share some of my own 1963 Topps cards. It's a set that isn't a big priority with me, but I enjoy them anyway.

"Hey Chris- I was looking at my wantlist today, mostly lamenting the sorry state of my '63 set in progress. I did a little poking around the 'net, and found a couple of places that indicated the Series from #446 thru #507 is notoriously harder than the last Series, but nobody seems to know why. After looking at my wantlist, I agree. Any ideas or inside information?"

Perhaps Topps used a short print run (series were usually about six weeks apart), or maybe they had a lot of sellers who simply didn't order a lot of new product because they still had a glut of series 3 & 4 wax packs still clogging their stores. Since Topps never released its production numbers for the set, we'll only be able to speculate.

My own '63 set-in-progress is quite pathetic. I still need about 350 of the cards myself, the only major HOFer is Carl Yastrzemski, the only notable rookie is a basketball HOFer (Dave DeBusschere), and while I have half a dozen Hi #s, I have only one card from the fifth series.

A shame really...the '63 set design is one of my favorites. Some cards have really vivid colors that really look great, especially where the colors run to the borders.. 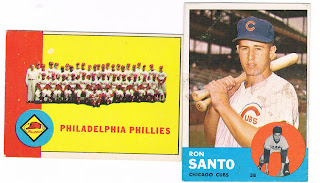