"The Wiener the World Awaited"

With preseason starting up in a couple of weeks, the 2010 NFL football season will be underway soon. I haven't shown off any of the cards from my Steelers collection in a little while, so here's one: 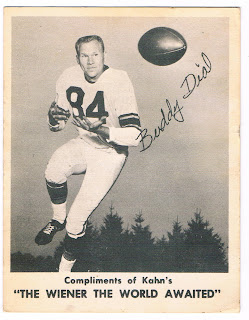 This classic football pose is from the 1963 Kahn's set. Kahn's was a Midwestern meat-packing company that included cards in their hot dog packages during the late 1950s and early 60s. While their best-known sets are baseball issues, they also released football sets from 1959-'64 and basketball cards from 1957-'66. Their football sets used a similar front design from year to year (except for 1964, which was in color and didn't have the ad banner at the bottom), so the back design is what identifies the card: 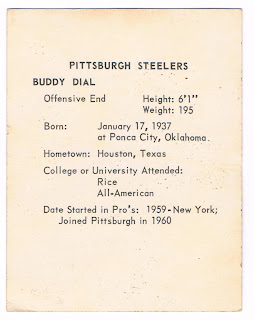 It can be identified as a '63 card because of the layout of the information and the fact that both the team name and player name are in boldface. All six Kahn's sets include Steelers; in fact, the first three years included only Steelers and Browns players. One of the biggest problems with Kahn's cards of all types can be demonstrated by the other card I own: 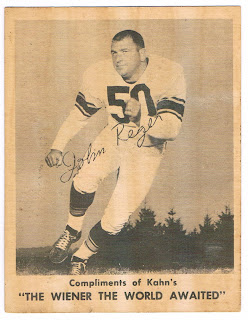 If you look closely, you'll see four vertical stains on the card. Those stains show where the card once rested against the contents of a hot dog package. This John Reger card is also from 1963, and the back illustrates the stain even better than the front: 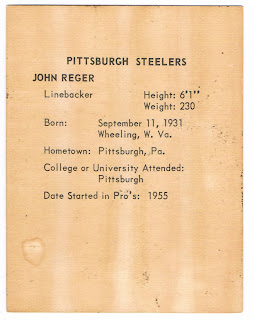 Try not to think about the fact that a piece of cardboard that had ink applied to it was actually resting against food.

Since collectors often place a premium value on cards that show little wear at all, items that have been packaged in such a way that they're mostly found with some damage can pose a conundrum. While regional issues like these are great for team collectors, cards issued with food that can leave residue often get little love among hobbyists.
Posted by Chris Stufflestreet at 8:30 AM