Before I get into my entry, I'd like to mention the new image at the top of the page. My new title header was something I managed to slap together using a free graphics program, a scan from a past auction catalog and Microsoft Paint. It's a low-tech design but I like it. I did a similar graphic for my 1973 Topps blog using my own cards.

This year was the first in almost a decade to see me pick up some current Topps packs. While putting together a base Series 1 set, I managed to get some special Million Card Giveaway cards. So far, I've managed to pull some decent cards but nothing I don't already own. One of the cards was a 1959 Billy Harrell, which I ended up trading for two cards.

Here's the profile as it stands now, at least for the pre-1980 cards. 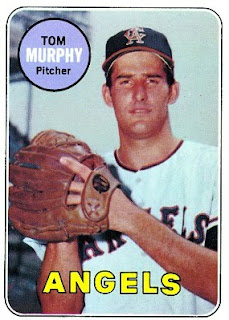 I like the 1969 Topps design. It looks like the designers realized the burlap borders of '68 looked a little silly and made a second attempt to get it right. "Let's put the player name inside the circle this time...place the team name at the bottom like in '67...oh yeah...just make the borders white. Perfect! Hopefully the kids'll forget the fact that last year's cards looked like potato sacks..." 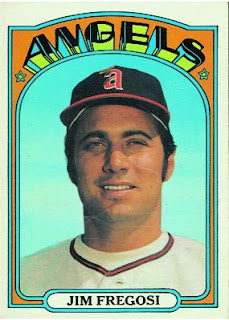 This 1972 Jim Fregosi wasn't unlocked from one of the code cards I pulled from the package. I got this one along with an '87 Rich Gossage (stop laughing, he's a Hall of Famer) in exchange for the '59 common I had. I figured I'd do better with Fregosi and a HOFer than a common. Personally, I'd rather have gotten a card of the guy the Mets traded away to get him, but I digress... 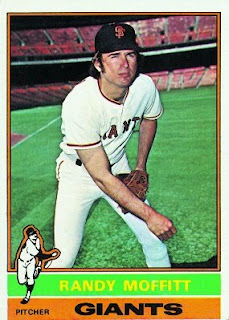 Randy Moffitt's sister was tennis star Billie Jean King. So despite having his own Topps cards, he wasn't the most famous person in the family. I'll bet family dinners were fun.


"I struck out Willie Stargell, Mom." 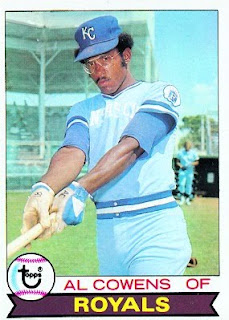 Finally, there's this 1979 card featuring Al Cowens. The Royals were a tough team at that time and seemed to be in contention every year. Al Cowens looks like he's pretty tough in this picture, like he's ready to beat the photographer with that bat if he keeps interrupting his routine.

As for the rest of the cards, I have two Pete Rose manager cards (1986 and '89) and '89 Yankees leaders card and Curt Schilling from 1990. If there's anybody who's also picking up some of these cards from Topps and wants to deal, I'll consider something for a card I need. My wantlist is linked on the left-hand side of this blog, below the archive list. I'll gladly share the results here and post any other cards I pick up this year.
Posted by Chris Stufflestreet at 8:30 AM