The newest issue of Collector magazine (Summer 2010) is out now. It's a full-color magazine devoted to hobby topics, with this terrific cover image: 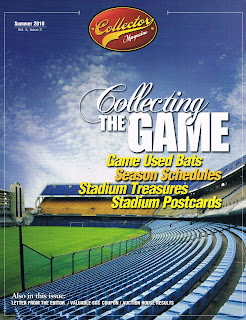 Before I explain anything else, the interest of full disclosure requires me to show this part of the magazine's table of contents: 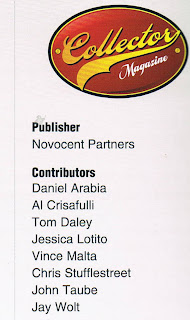 The longest name on the list of contributors? That's me. So yes, what follows is a biased opinion (but one I'm not getting paid to give). I've also mentioned in this blog back in April that I've written material for Collector magazine before.

The theme of the entire edition, "Collecting the Game," goes beyond the cards and focuses on other types of collectibles. There are articles about team schedules, game-used bats, another article covers stadium postcards, and then there's this article on page 14:

This one is mine. It covers different types of stadium collectibles such as seats, turnstiles, bases, etc. As some of the regular readers have come to expect, the writing of that article (and all of the pieces in the magazine) is top-notch and informative. Again, there's some bias when I say that but I am quite proud to have contributed to such a great hobby magazine. One of my favorite things about the magazine is that -- with all the information it gives -- there is minimal discussion about dollar values outside of the advertisements. I've mentioned many times on this blog that my collecting passion goes well beyond the matter of dollars and cents and enjoy knowing that others understand the intangible aspect as well.

Now that I've said that, the best piece of the entire issue is the one at the end that ties everything together. Al Crisafulli (also the man heading Novocent Partners, the magazine's publisher) writes a piece about what baseball means to him now that his own son has picked up an interest in the sport and begun to pay attention to smaller details. As a father myself, it's hard to read it and not feel the sentiment Al puts into his piece. Even if you could get James Earl Jones to recite that article the way he gave his soliloquy at the end of Field of Dreams, it couldn't convey Al's message any better than he did typing them on his keyboard.

If you're a serious collector, consider subscribing. The cost is $20 for a year (4 issues), which is the same price as a "blaster box" of modern cards but without the buyer's remorse that sometimes comes once the box has been opened. Issues are available by clicking here. And if my words sway you to subscribe, send them an email -- collectormagazine@novocentpartners.com -- and let them know they should consider letting me write more articles for them in the future.
Posted by Chris Stufflestreet at 8:43 AM